Large and medium-sized impact basins on Rhea’s trailing hemisphere are thrown into sharp relief by the grazing rays of the Sun. Bright, wispy features reach across the surface from the east.

This view shows roughly the same region as the color view Rhea in Natural Color.

North on Rhea (1,528 kilometers, or 949 miles across) is up and rotated 12 degrees to the left. The image was taken in visible light with the Cassini spacecraft narrow-angle camera on July 21, 2007. The view was acquired at a distance of approximately 783,000 kilometers (487,000 miles) from Rhea and at a Sun-Rhea-spacecraft, or phase, angle of 76 degrees. Image scale is 5 kilometers (3 miles) per pixel. 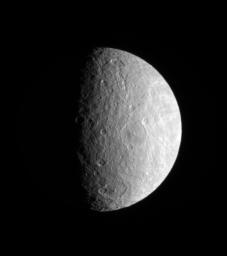