Bands and spots in Saturn’s atmosphere, including a dark band south of the equator with a scalloped border, are visible in this image from the Cassini-Huygens spacecraft. 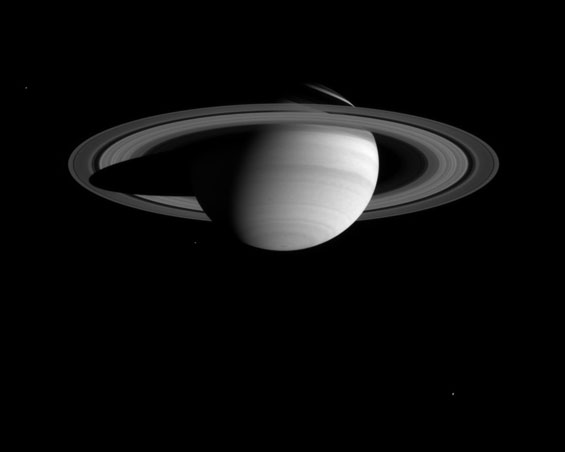 The BL1 broadband spectral filter (centered at 451 nanometers) allows Cassini to “see” light in a part of the spectrum visible as the color blue to human eyes. Scientist can combine images made with this filter with those taken with red and green filters to create full-color composites.

In this image, everything on the planet is a cloud, and the contrast between bright and dark features is determined by the different blue-light absorbing properties of the particles that comprise the clouds. White regions contain material reflecting in the blue; dark regions contain material absorbing in the blue. This reflecting/absorbing behavior is controlled by the composition of the cloud’s colored material, which is still a mystery — one which may be answered by Cassini. The differing concentrations of this material across the planet are responsible for its banded appearance in the visible region of the electromagnetic spectrum.

The Cassini-Huygens mission is a cooperative project of NASA, the European Space Agency and the Italian Space Agency. The Jet Propulsion Laboratory, a division of the California Institute of Technology in Pasadena, manages the Cassini-Huygens mission for NASA’s Office of Space Science, Washington, D.C. The imaging team is based at the Space Science Institute, Boulder, Colo.