Cassini offers up this nice view of the craters Odysseus (at the top) and Melanthius (at the bottom) on Saturn’s moon Tethys. Melanthius appears to have an elongated mountain range, rather than a single central peak, at its center.

This is the trailing hemisphere of Tethys, being centered on terrain at roughly 270 degrees longitude. North on Tethys is up. The diameter of Tethys is 1,071 kilometers (665 miles). 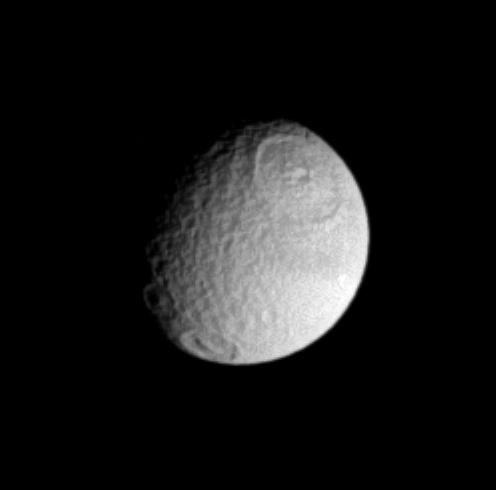 This image was taken with the Cassini spacecraft narrow-angle camera on Sept. 20, 2005, through a filter sensitive to wavelengths of ultraviolet light centered at 338 nanometers. This view was obtained at a distance of approximately 1.4 million kilometers (900,000 miles) from Tethys and at a Sun-Tethys-spacecraft, or phase, angle of 50 degrees. Resolution in the original image was 8 kilometers (5 miles) per pixel. The image has been magnified by a factor of two to aid visibility.