The visual and infrared mapping spectrometer on the Cassini spacecraft has found evidence for a material dubbed “dirt” in Saturn’s rings. The observations indicate that some type of sorting mechanism is concentrating this unidentified material in the gaps between the rings.

The images here show the rings just after Cassini successfully entered Saturn’s orbit. The infrared reflectance image shows the brightness of scattered light transmitted through the rings. The thicker parts of the rings block more light, while the thinner parts, like the Cassini Division, let more light through. Assuming the rings are made of boulders, they might appear as a multitude of tiny moons.

The water ice strength image shows the amount of water in the rings, which appears to peak in the region of the A ring.

The “dirt” image shows that the so-called dirty material is most abundant in the thinnest parts of the rings: the Cassini Division, in the Encke and in other small gaps. This material appears remarkably similar to what Cassini measured on Saturn’s moon, Phoebe. 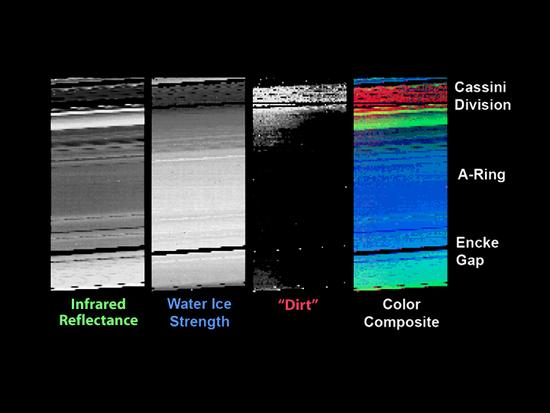 The Cassini-Huygens mission is a cooperative project of NASA, the European Space Agency and the Italian Space Agency. The Jet Propulsion Laboratory, a division of the California Institute of Technology in Pasadena, manages the Cassini-Huygens mission for NASA’s Office of Space Science, Washington, D.C. The Cassini orbiter was designed, developed and assembled at JPL. The visual and infrared mapping spectrometer team is based at the University of Arizona, Tucson, Ariz.