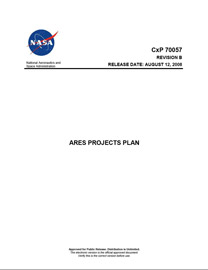 National Security Presidential Directive (NSPD) 31, the U.S. Space Exploration Policy (USEP), directs NASA to retire the Space Shuttle in 2010 and to replace it with a new generation of space transportation systems for crew and cargo travel to the Moon, Mars, and beyond. Crew transportation to the International Space Station (ISS) is planned for no later than 2014, and the first crewed lunar mission is planned in the 2020 time frame (see Figure 1-1).

The Project is driven by a desire to reduce the Nation’s human spaceflight gap, as well as to begin work on the Ares V and Altair lunar lander as soon as possible. Further contributing to the Project’s sense of urgency is the need to rebuild the Agency’s capacity as the world’s recognized leader in the development of launch systems. This must be accomplished despite severe budget constraints through at least the year 2010, as well as through the uncertainty of forthcoming changes in the Nation’s administration in 2009. 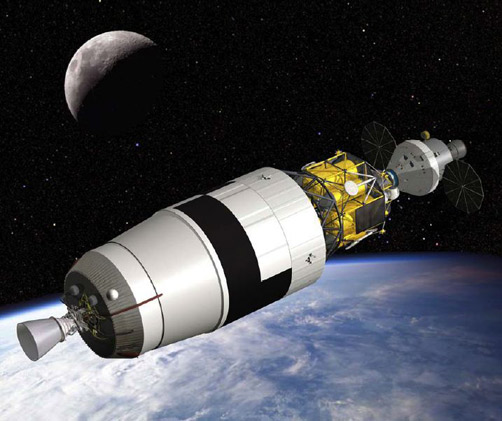 Safe, reliable, and cost-effective space transportation is a foundational piece of America’s future in space, both strategic and tactical. The Ares Projects Office (APO) will deliver operational capabilities that support the Agency’s responsibility to fulfill the USEP and to help ensure United States (U.S.) preeminence in space through assured access, as outlined in the U.S. Space Transportation Policy (January 2005) and as directed by the NASA Authorization Act of 2005 and the Fiscal Year (FY) 2006 Appropriations Act for NASA.

The Ares management team has developed an aggressive, yet realistic, multiyear plan and has implemented a rigorous systems engineering approach in coordination with, and guided by, the Constellation Program (CxP) and the Exploration Systems Mission Directorate (ESMD). The CxP 70003, Constellation Program Plan, governs this Ares Projects Plan. Change control and approval authority is described in Section 3.11, Information and Configuration Management
Plan. Unique Work Breakdown Structure (WBS) numbers are given in Section 2.2, WBS Baseline.

The Ares I is a two-stage series-burn launch vehicle with interfaces for the Orion payload and the ground systems at the launch site (see Figure 1-7). The first stage has a RSRMV with thrust vector control (TVC) and a separation system. The motor utilizes polybutadiene acrylonitrile (PBAN) propellant. The upper (second) stage is a self-supporting cylindrical system that houses the LOX and LH2 tanks that feed propellant to the J-2X engine, along with the vehicle’s avionics, roll control, and the upper stage thrust vector system. Organizationally, the Ares I hardware elements consist of the First Stage (FS) Element, Upper Stage (US) Element, and Upper Stage Engine (USE) Element. These elements are further discussed in Section 1.6, Technical Summary. 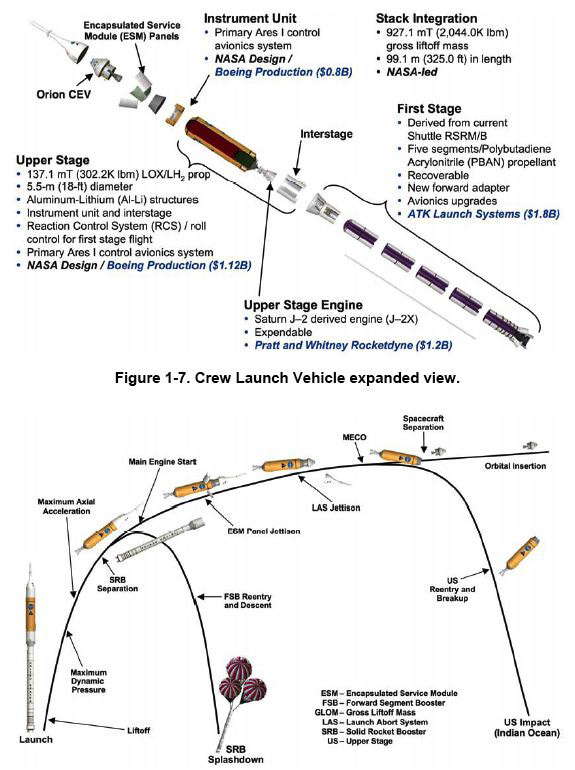 The heavy-lift Ares V, shown in Figure 1-9, is composed of two 5.5-segment RSRBs and a 10-meter-diameter core stage tank supplying LOX/LH2 to a cluster of six RS-68 engines. The 10-meter-diameter EDS, powered by the J-2X engine, provides final impulse into LEO, circularizes itself and the Altair lunar lander into the assembly orbit where the Orion is joined to the Altair, and provides the impulse to accelerate the Orion and Altair to escape velocity and lunar orbit insertion (LOI). The EDS is planned to have extensive commonality with the Ares I upper stage in the areas of manufacturing, avionics/software, main propulsion system (MPS) components, TVC, J-2X engine, and testing. The Ares organization currently includes an Ares V integration function to coordinate engineering studies, budget planning, and represent the vehicle in Constellation-wide lunar architecture issues. The Ares V configuration can lift an estimated 143 mT to LEO in the dual launch mode with the Ares I, and 63 mT to TLI. Further operational details, including the Ares V flight profile, may be found in Section 3.9, Logistics and Operations. 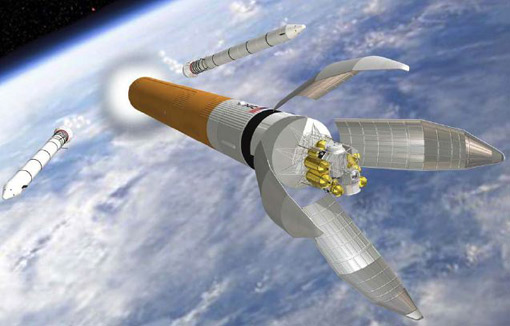