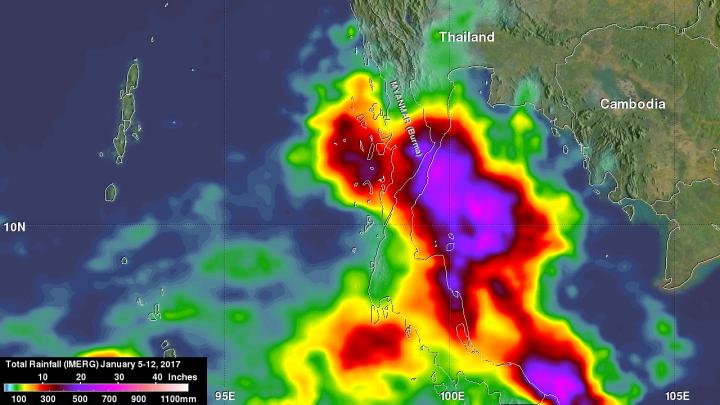 Widespread flooding has recently caused the deaths of dozens of people in southern Thailand. Frequent and persistent downpours have resulted in record rainfall totals and NASA calculated rainfall over the region from January 5 to January 12, 2017.

The Global Precipitation Measurement mission or GPM core satellite is part of a constellation of satellites that can measure rainfall from space. GPM is a joint mission between NASA and the Japan Aerospace Exploration Agency and the data is input into NASA’s Integrated Multi-satellitE Retrievals for GPM (IMERG) data product.

IMERG was used to estimate the total amount of rain that fell over southern Thailand over the week. Extreme rainfall totals of over 700 mm (27.6 inches) were found over the Gulf of Thailand. The highest rainfall total estimates over land were greater than 500 mm (19.7 inches) on the eastern coast of the Malay Peninsula in the Bang Saphan District.

The TRMM-based, near-real time Multi-satellite Precipitation Analysis (TMPA) has been used to monitor rainfall over the global Tropics for many years. By subtracting the long-term average rainfall or climatology, rainfall anomalies can be constructed to show deviations from the normal pattern.

TRMM is the Tropical Rainfall Measuring Mission satellite that was in operation from 1997 to April 2015. It was designed to measure rainfall over the global Tropics using both passive and active sensors, including the first and at the time only precipitation radar in space. With its combination of passive microwave and active radar sensors, TRMM was used to calibrate rainfall estimates from other satellites to expand its coverage. The TRMM satellite produced over 17 years of precipitation measurements that were a valuable contribution to global rainfall climatology.

TRMM’s successor, the Global Precipitation Measurement mission or GPM core satellite was launched on February 27, 2014. TRMM and GPM are joint missions between NASA and the Japanese space agency JAXA.

On January 13, 2017 the Thai Meteorological Department (TMD) issued a Weather Warning for Heavy Rains in Lower South and Strong Wind in Gulf [of Thailand]. The Gulf borders southwestern Thailand, Cambodia, and southern Vietnam. It is up to 350 miles (563 km) wide and 450 miles (724 km) long.

The TMD warning stated “By 15 January, the moderate high pressure from China will extend to upper Thailand inducing the stronger northeast monsoon prevailing across the Gulf and the South. Outbreaks of more rain will be expected. During 16-18 January, isolated heavy rain will be forecast especially for provinces: Chumphon, Surat Thani, Nakhon Si Thammarat, Phatthalung, Songkhla, Pattani, Yala, and Narathiwat. People should beware of severe conditions and possible flash flood. Areas prone to landslide are still watched and people follow closely the weather update. The strong winds over the Gulf force waves up to 2-3 meters. People along the Gulf shore should beware of inshore surf. All ships proceed with caution and small boats keep.”

For updated forecasts from the Thai Meteorological Department, visit: https://www.tmd.go.th/en/.