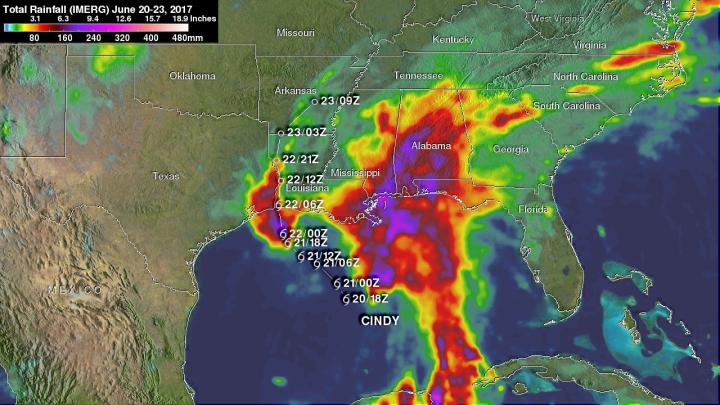 Tropical storm Cindy was downgraded to a tropical depression after moving onshore near the Texas and Louisiana Border on Thursday June 22, 2017 and bringing a lot of rain with it. That rainfall was measured by NASA using satellite data.

On June 23, the Flash flood warnings were in effect for portions of lower and mid-Mississippi Valley.

Flooding was reported along the Gulf Coast even before Cindy made landfall. The rainfall around tropical storm Cindy was asymmetrical. The majority of heavy rainfall with the tropical cyclone was located east of Cindy’s center in the states along the Gulf Coast from Louisiana through the Florida Panhandle. The tropical depression continued to spread heavy rain and occasionally severe thunderstorms after it came ashore. Severe thunderstorms spawned a tornado June 22, Thursday afternoon that injured four people near Jefferson, Alabama.

IMERG data are produced using data from the satellites in the GPM constellation, and is calibrated with measurements from the GPM Core Observatory as well as rain gauge networks around the world. The IMERG analysis of Cindy’s rainfall indicates that rainfall totals exceeding 10.5 inches (266.7 mm) occurred in eastern Texas, southern Louisiana, Mississippi, Alabama and northwestern Florida. The most extreme rainfall totals estimated by IMERG was greater than 16 inches (406.4 mm) over the open waters of the Gulf of Mexico near the Yucatan Peninsula.

The Satellites in the GPM Constellation for IMERG Data

The Integrated Multi-satellitE Retrievals for GPM (IMERG) creates a merged precipitation product from the GPM constellation of satellites. These satellites include DMSPs from the U.S. Department of Defense, GCOM-W from the Japan Aerospace Exploration Agency (JAXA), Megha-Tropiques from the Centre National D’etudies Spatiales (CNES) and Indian Space Research Organization (ISRO), NOAA series from the National Oceanic and Atmospheric Administration (NOAA), Suomi-NPP from NOAA-NASA, and MetOps from the European Organisation for the Exploitation of Meteorological Satellites (EUMETSAT). All of the instruments (radiometers) onboard the constellation partners are intercalibrated with information from the GPM Core Observatory’s GPM Microwave Imager (GMI) and Dual-frequency Precipitation Radar (DPR).

At 11 a.m. EDT (1500 UTC) on Friday, June 23, the center of Cindy was located near 36.1 degrees north latitude and 89.6 degrees west longitude. That’s about 50 miles (81 km) northwest of Jackson/Mckellar, Tennessee and about 75 miles (121 km) north-northeast of Memphis, Tennessee. Maximum sustained winds are near 35 mph (55 kph) with higher gusts. Minimum central pressure is 1002 millibars. Under increasing vertical wind shear…the circulation of Tropical Depression Cindy became elongated during the morning of June 23 as seen on imagery from NOAA’s GOES-East satellite.

Rainfall Continues to be Primary Threat

The primary threat with this storm will continue to be moderate to heavy rain from the lower and Mississippi Valley northeastward across the Tennessee and Ohio Valleys into the central Appalachians through tonight before rapidly moving off the east coast on Saturday.

The National Weather Service, Weather Prediction Center (NPC) in College Park, Maryland is now providing forecast updates on Cindy. NPC noted that Tropical Depression Cindy is expected to become post-tropical this afternoon, June 23, as it continues to lose tropical characteristics and should become extratropical by early Saturday, June 24 when a fast-moving cold front merges with the remnant circulation over the Mid-Atlantic region.

For updated forecasts on Cindy from the WPC, visit: http://www.wpc.ncep.noaa.gov/tropical/tropstorms.shtml