Mustang Complex Fires in Idaho At Night As Seen From Space 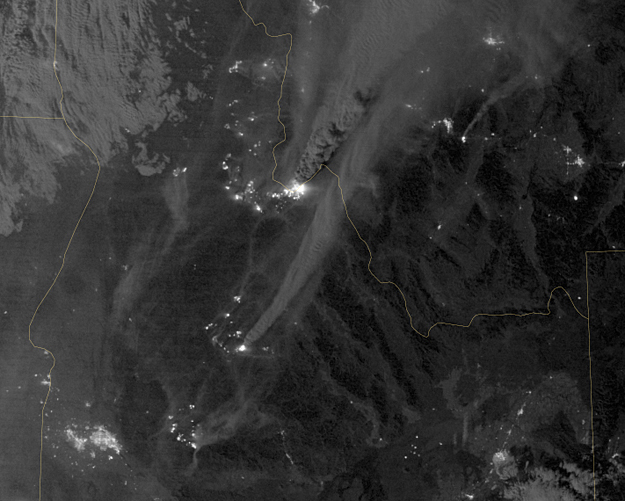 On August 29, 2012, the Visible Infrared Imaging Radiometer Suite (VIIRS) on the Suomi NPP satellite captured this nighttime view of wildfires burning in Idaho and Montana.

The image was captured by the VIIRS “day-night band,” which detects light in a range of wavelengths from green to near-infrared and uses filtering techniques to observe signals such as gas flares, auroras, wildfires, city lights, and reflected moonlight. When the image was acquired, the moon was in its waxing gibbous phase, meaning it was more than half-lit, but less than full.

Numerous hot spots from the Mustang Complex Fire are visible in northern Idaho. A plume of thick, billowing smoke streams west from the brightest fires near the Idaho-Montana border. The Halstead and Trinity Ridge fires are visible to the south. In addition to the fires, city lights from Boise and other smaller cities appear throughout the image. A bank of clouds is located west of the Mustang Complex, over southeastern Washington and northeastern Oregon.

The Operational Line System (OLS)–an earlier generation of night-viewing sensors on the U.S. Defense Meteorological Satellite Program (DMSP) satellites–was also capable of detecting fires at night. But the VIIRS “day-night band” is far better than OLS at resolving them. Each pixel of an VIIRS image shows roughly 740 meters (0.46 miles), compared to the 3-kilometer footprint (1.86 miles) on the OLS system.

Learn more about the VIIRS day-night band and nighttime imaging of Earth in our new feature story: Out of the Blue and Into the Black.

NASA Earth Observatory image by Jesse Allen and Robert Simmon, using VIIRS Day-Night Band data from the Suomi National Polar-orbiting Partnership. Suomi NPP is the result of a partnership between NASA, the National Oceanic and Atmospheric Administration, and the Department of Defense. Caption by Adam Voiland.