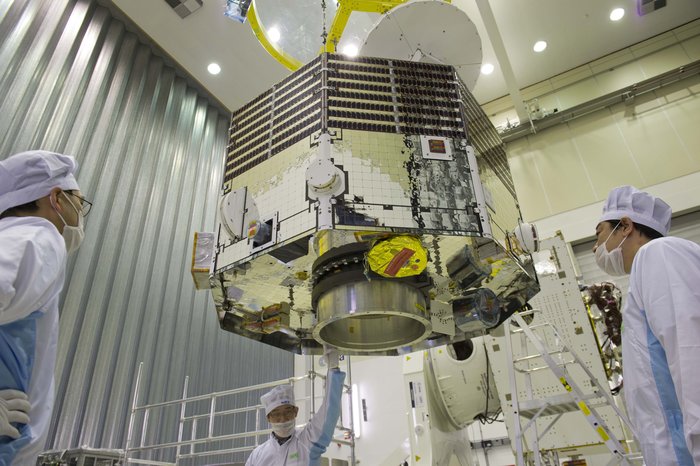 Unboxing the Mercury Magnetospheric Orbiter at ESA’s Test Centre, Japan’s contribution to the joint BepiColombomission to the innermost world of our Solar System.

MMO will sit at the top of the BepiColombo stack on launch in January 2017. It will be placed atop ESA’s Mercury Planetary Orbiter (MPO), which will be attached in turn to a carrier spacecraft, the Mercury Transfer Module (MTM), tasked with transporting the other two via highly efficient electric propulsion.

While MPO will go into an approximately 400 x 1500 km mapping orbit around Mercury, MMO will enter a highly elliptical orbit to study the planet’s enigmatically strong magnetic field.

The two spacecraft employ differing strategies to cope with temperatures in excess of 350°C involved in operating around the closest world to the Sun. The octagonal MMO will spin 15 times per minute to distribute heat evenly across its highly polished surface.

MPO, meanwhile, will maintain a steady attitude, covered with high-temperature insulation with a rear-facing radiator behind protective louvres that will dump waste heat into space.

But since MMO cannot spin during BepiColombo’s seven-year cruise phase, it will be fitted with a dedicated sunshield, the Magnetospheric Orbiter Sunshield and Interface Structure.

MPO has undergone thermal balance/thermal vacuum testing, with MTM scheduled to do the same towards the end of the year.

MMO’s arrival at ESTEC in Noordwijk, the Netherlands, on 20 April will allow follow-on mechanical testing of the complete stack, known as the Mercury Composite Spacecraft.