In its six-and-a-half years on Mars, NASA’s Mars Exploration Rover Opportunity had never seen a dust devil before this month, despite some systematic searches in past years and the fact that its twin rover, Spirit, has seen dozens of dust devils at its location halfway around the planet.

A tall column of swirling dust appears in a routine image that Opportunity took with its panoramic camera on July 15. The rover took the image in the drive direction, east-southeastward, right after a drive of about 70 meters (230 feet). The image was taken for use in planning the next drive.

“This is the first dust devil seen by Opportunity,” said Mark Lemmon of Texas A&M University, College Station, a member of the rover science team.

Spirit’s area, inside Gusev Crater, is rougher in ground texture, and dustier, than the area where Opportunity is working in the Meridiani Planum region. Those factors at Gusev allow vortices of wind to form more readily and raise more dust, compared to conditions at Meridiani, Lemmon explained. Orbiters have photographed tracks left by dust devils near Opportunity, but the tracks are scarcer there than near Spirit. Swirling winds at Meridiani may be more common than visible signs of them, if the winds occur where there is no loose dust to disturb. 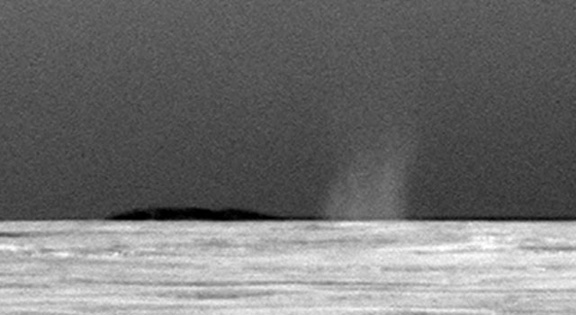 Just one day before Opportunity captured the dust devil image, wind cleaned some of the dust off the rover’s solar array, increasing electricity output from the array by more than 10 percent.

“That might have just been a coincidence, but there could be a connection,” Lemmon said. The team is resuming systematic checks for afternoon dust devils with Opportunity’s navigation camera, for the first time in about three years.

Opportunity and Spirit arrived on Mars in January 2004 for missions designed to last for three months. NASA’s Jet Propulsion Laboratory, a division of the California Institute of Technology in Pasadena, manages the Mars Exploration Rover Project for the NASA Science Mission Directorate, Washington. For more information about the project and images from the rovers, visit http://www.nasa.gov/rovers.