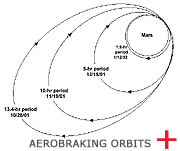 “The initial phase of aerobraking has gone exceedingly
well. By skimming through the upper reaches of the Mars
atmosphere during each orbit, we have reduced our orbital
period by more than three hours in the past two weeks,” said
David A. Spencer, the Odyssey mission manager at NASA’s Jet
Propulsion Laboratory, Pasadena, Calif. Odyssey’s orbital
period, the time required for the spacecraft to complete one
revolution in its orbit around Mars, is currently 15 hours.

The spacecraft’s closest approach to the planet, know as
the orbit’s periapsis, has been carefully lowered to 110
kilometers (68 miles) above the martian surface. “This
closest approach occurs over the north polar region on Mars,
in a relatively low density region surrounded by strong winds
like the jet stream on Earth,” said Dr. Richard Zurek of JPL,
who chairs the aerobraking advisory group. “Like Earth, Mars
has distinct seasons, and this low density area, called the
polar vortex, develops each fall and will persist until
spring, long after Odyssey has finished aerobraking,”

NASA’s Mars Global Surveyor spacecraft is monitoring the
lower atmosphere of Mars, observing the entire planet each day
to watch for dust storms and weather events that could affect
the upper atmosphere. If needed, Odyssey could also use its
own instruments to watch for dust storms. To that end, flight
controllers have completed the calibration and testing of the
thermal emission imaging system. The imaging team at Arizona
State University, Tempe, took the first visible wavelength
image of the planet on Nov. 2, which complements the thermal
infrared image that was taken earlier.

The aerobraking phase is planned for completion in late
January 2002. At that point, Odyssey will be in its desired
circular orbit, and the science mapping mission will begin
sometime in early February.

JPL manages the 2001 Mars Odyssey mission for NASA’s
Office of Space Science, Washington, D.C. Principal
investigators at Arizona State University in Tempe, the
University of Arizona in Tucson, and NASA’s Johnson Space
Center, Houston, Texas, operate the science instruments.
Lockheed Martin Astronautics, Denver, Colo., is the prime
contractor for the project, and developed and built the
orbiter. Mission operations are conducted jointly from
Lockheed Martin and from JPL, a division of the California
Institute of Technology in Pasadena. NASA’s Langley Research
Center in Hampton, Va., is providing aerobraking support to
JPL’s navigation team during mission operations.