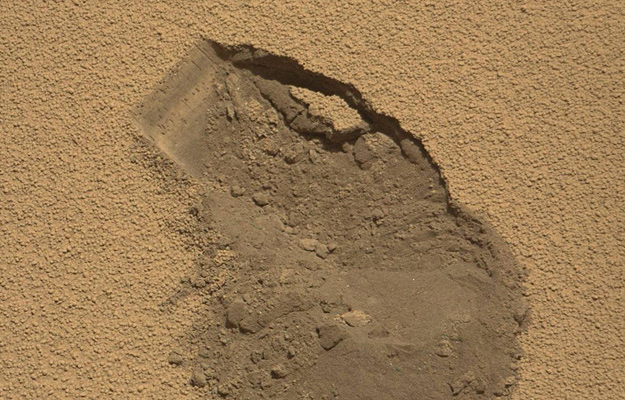 The team operating Curiosity decided on Oct. 9, 2012, to proceed with using the rover’s first scoop of Martian material. Plans for Sol 64 (Oct. 10) call for shifting the scoopful of sand and dust into the mechanism for sieving and portioning samples, and vibrating it vigorously to clean internal surfaces of the mechanism. This first scooped sample, and the second one, will be discarded after use, since they are only being used for the cleaning process. Subsequent samples scooped from the same “Rocknest” area will be delivered to analytical instruments.

Investigation of a small, bright object thought to have come from the rover may resume between the first and second scoop. Over the past two sols, with rover arm activities on hold, the team has assessed the object as likely to be some type of plastic wrapper material, such as a tube used around a wire, possibly having fallen onto the rover from the Mars Science Laboratory spacecraft’s descent stage during the landing in August.

Sol 63 activities included extended weather measurements by the Rover Environmental Monitoring Station, or REMS. The Sol 63 planning also called for panoramic imaging by the Mast Camera, or Mastcam, in the early morning light of Sol 64, before uplink of Sol 64 commands. A Sol 61 raw image from the right Mast Camera, at http://1.usa.gov/VSwTN7 , shows the location from which Curiosity’s first scoop of soil was collected.