This map of the surface of Saturn’s moon Iapetus (1,436 kilometers, or 892 miles across), generated from images taken by NASA’s Voyager spacecraft, illustrates the imaging coverage planned during Cassini’s flyby on Dec. 31, 2004.

Cassini will glide past Iapetus at a distance of approximately 123,400 kilometers (76,700 miles) on New Year’s Eve, at a speed of about 2 kilometers per second (4,474 miles per hour). Imaging coverage will be focused primarily on the dark terrain of Iapetus’ leading hemisphere, in the area known as Cassini Regio. The spacecraft’s namesake, Jean-Dominique Cassini, discovered Iapetus in 1672 and was only able to see the moon’s bright trailing hemisphere.

Colored lines on the map enclose regions that will be covered at different imaging scales as Cassini approaches Iapetus. Images from Cassini’s flyby will be superior in resolution to those obtained by Voyager 2 in August 1981. Voyager 2 passed Iapetus at a distance of approximately 909,000 kilometers (564,800 miles) at closest approach, yielding a best resolution image of about 8 kilometers per pixel. The resolution of Cassini images from this flyby will be 1.5 kilometers per pixel and better. 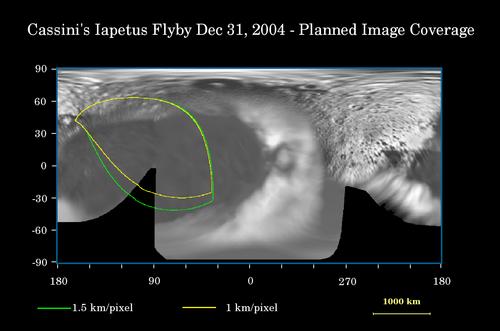 The Cassini-Huygens mission is a cooperative project of NASA, the European Space Agency and the Italian Space Agency. The Jet Propulsion Laboratory, a division of the California Institute of Technology in Pasadena, manages the mission for NASA’s Science Mission Directorate, Washington, D.C. The Cassini orbiter and its two onboard cameras were designed, developed and assembled at JPL. The imaging team is based at the Space Science Institute, Boulder, Colo. For more information about the Cassini-Huygens mission visit http://saturn.jpl.nasa.gov . For additional images visit the Cassini imaging team homepage http://ciclops.org .