By SpaceRef Editor
August 3, 2009
Filed under Earth, polar, The Antarctic Sun, US

By Peter Rejcek, The Antarctic Sun

Every year, literally hundreds of scientists head south to Antarctica to drill for ice cores, to study the physiology of penguins and seals, and to carry out a variety of other research that has implications from climate change to the origins of the universe.

But, during the winter months, there’s nary a scientist to be found. Most of the folks left on the Ice at the U.S. Antarctic Program’s three research stations for the dark, cold months are support staff in charge of maintaining facilities and equipment.

A small handful has the specialized task of ensuring ongoing research experiments hum along and data flow back to home institutions. These are the research associates (RAs) — engineer types who seem to know how to tinker and fix just about anything. MacGyvers of the beaker set.

“We are the eyes and hands for the grantee in this remote location at the end of the planet,” wrote Fuhrmann, one of two research associates at the South Pole, via e-mail. “We must remember, although we’re only here for a year, the grantee has put a fair amount of time and energy (perhaps a good portion of their career) into his [or] her experiment.”

This is Fuhrmann’s first trip to Antarctica, and he jumped in with both bunny boots on for a yearlong stint at South Pole Station, where the scientific emphasis is on “space science,” and where Fuhrmann looks after instruments like riometers, all-sky cameras, and fluxgate magnetometers that measure properties in the upper atmosphere.

This particular branch of research is new to Fuhrmann, but he had an extensive background in science support in a realm closer to home — oceanography. He has worked for both Monterey Bay Aquarium Research Institute and Woods Hole Oceanographic Institute (WHOI) as an engineer and pilot for underwater robots, including WHOI’s well-known ROV (remotely operated vehicle), Jason II.

And he’s no stranger to the polar region, with stints aboard Arctic research vessels and at a Greenland field camp. “That trip (along with my interest in alpine and ice climbing) confirmed that ice support could eventually be a career goal,” Fuhrmann said.

Though his most recent gig before heading south had him working on electrical systems design for a Las Vegas show with a company he had worked for a decade prior, doing robotics on commercials and films such as “The Perfect Storm.”

“The diversity and flexibility inherent in the special effects industry provided a smooth transition into this position,” Fuhrmann said.

But now he has returned to his first passion. “I wasn’t too particular on the location [in Antarctica], but I was more concerned with supporting science directly and able to impart my electrical/mechanical skill set,” Fuhrmann said. “I wasn’t really prepared to jump into a 12-month contract, but why not, especially since my preference is to continue supporting science on the ice (Arctic and/or Antarctica) in the future.” 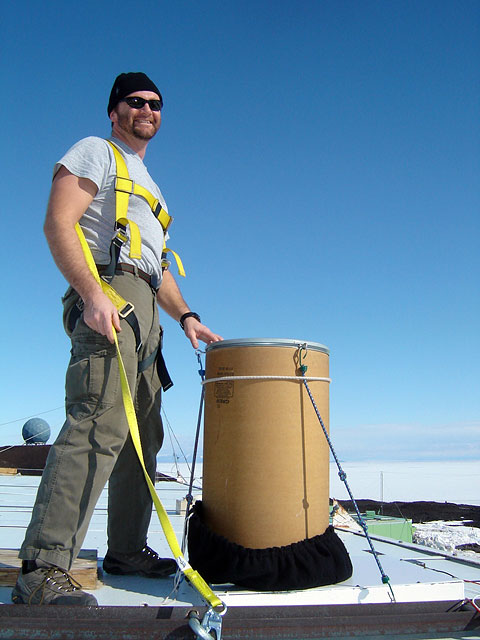 A former teacher of chemistry at Western Carolina University, Jason Bryenton hadn’t worked in science support before taking the research associate job at McMurdo Station for the first time for the 2006-07 field season. He said his science background helped prepare him to tend the 16 different experiments at McMurdo, including a project that looks at the ozone hole and another that tracks the propagation of lightning strikes.

“I think having a good science background is ideal, in that it helps understand where the researchers are coming from and why the experiments are the way they are,” Bryenton said.

“Like so many others, I took the job for the adventure of coming to Antarctica,” he added. “Now that I’ve had the job for a while, I find it is an excellent fit for who I am, and what I want in a job. I have plans to return for the winter of 2010, as the RA here in McMurdo.”

Neal Scheibe wasn’t necessarily seeking out a polar adventure, or even an engineering job in the scientific realm. In 2005, the electrical engineer simply needed a job.

“I’m probably somewhat atypical of most Antarcticans, because it wasn’t some life-long dream of mine [to go to Antarctica] or something I’ve been trying to do for years and years and years,” said Scheibe, a research associate at Palmer Station on the Antarctic Peninsula.

But the science and lifestyle of seasonal work have become addictive. Scheibe is on his fourth winter on the Ice, serving his first two at South Pole and now on his second at Palmer.

“I do enjoy the winters, actually,” he said. “At Pole, you have the auroras and you get that close community feeling. Here, with the boats coming and going, you don’t get that closed community or aurora here at all, but it’s an amazing outdoor experience here.” 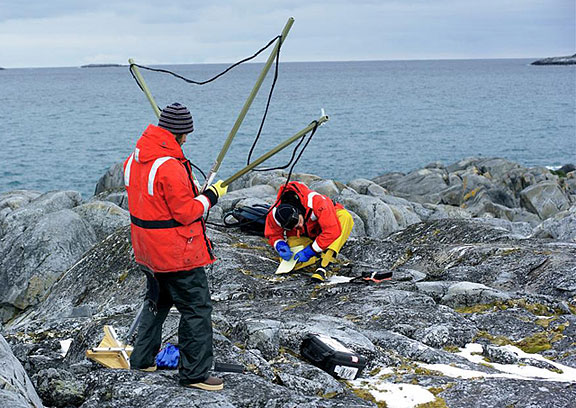 Image: Neal Scheibe, left, and Dan Golden from Stanford University search for a new VLF antenna site near Palmer Station. The process is called humsniffing, as the duo are looking for background noise, or hum, from the station that might interfere with the experiment. Scheibe maintains about a dozen experiments. Photo Credit: Sean Bonnette

In fact, the self-described nerd now calls himself an “action nerd” on his blog. His job at Palmer Station requires a certain amount of fitness, as Scheibe checks on various instruments, such as a very low frequency (VLF) antenna or automatic weather stations, like a doctor making rounds in a hospital.

“Compared to most of the jobs here, I definitely go to one of the bigger areas,” he said. “I’m either hiking up the glacier, hiking through the backyard [behind Palmer Station], or taking a boat out to one of the peninsulas.”

Fuhrmann also doesn’t spend too much time behind a computer unless it’s to communicate with one of the National Science Foundation (NSF) grantees whose projects he oversees. Otherwise, his daily excursions include a trek out to the Atmospheric Research Observatory (ARO) to check on two wind turbines for an autonomous GPS station, the UV detector, and the extremely low frequency (ELF) magnetometer.

It’s a trip he has to make every day no matter the holiday or weather outside. “It’ll be minus 70 [degrees Fahrenheit], dark as all heck, blowing 30-plus knots with one to two meters visibility, and you’re feeling worn out (the South Pole does that considering the high-altitude and lack of humidity, which is often accompanied with lack of sleep), but the walk to ARO that I’ve been putting off most of the day must still take place.” 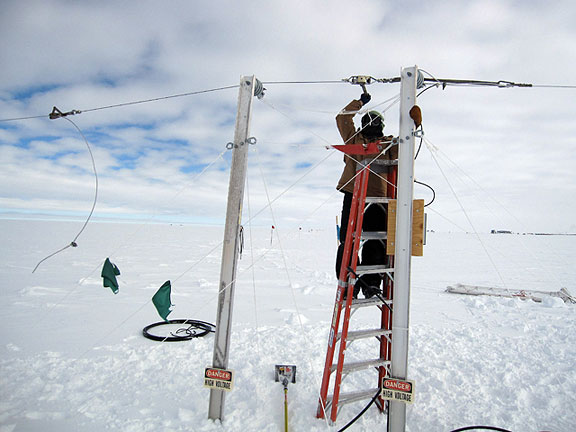 Robert Fuhrmann reassembles the seven-kilometer-long VLF dipole antenna during the summer at South Pole. The transmissions are received at Palmer Station. The system was out of commission for several years until the NSF approved funding to bring it back online. It is one of nine projects he oversees for grantees. Robert Fuhrmann offers a pretty concise definition of his job as a research associate at the South Pole over the winter: “We’re customer field service engineers.” Photo Credit: Mark Daniel

Despite strong backgrounds in science and engineering, the RAs have a diverse set of instruments to maintain. Each spends several weeks traveling around the United States to various institutions for training.

“Most of the training I received revolved around becoming familiar with the instrumentation and associated software,” Bryenton said. “It also gave the researchers and me a chance to meet and become familiar.”

Said Fuhrmann, “After the trips, I would stress the priority was more of them meeting the stranger that will be taking care of their project for a year.”

Bryenton traveled to five different facilities in the course of about a month, crisscrossing the country, from Alaska to both coasts. “It was mentally and physically exhausting,” he said.
Long days

The long, dark winter months are no less challenging for the research associates. At the smaller Pole and Palmer stations, the research associates, like all their fellow winter-overs, not only have their regular jobs to do. For instance, Scheibe and Fuhrmann serve on emergency response teams and each grabs a broom when it’s his turn for general station housekeeping, known as “house mouse” on the Ice.

Then there’s the dozen projects that Scheibe oversees, not including his meteorological duties and all the associated paperwork and reports. “When you put it all together, it makes a pretty full week,” Scheibe said.

And that all assumes that each gizmo is in good working order — an unlikely scenario given the harsh Antarctic conditions, particularly over the winter. Temperatures at South Pole can drop below minus 100 degrees Fahrenheit. McMurdo can also experience extreme drops in temperature, as well as storms that pack hurricane-strength winds. Palmer is also known for its stormy weather, with the Antarctic Peninsula one of the cloudiest places on the continent.

“There are occasions when a project develops a problem, and that is the real reason I’m here,” Bryenton said. “I’ve been trained to trouble shoot the instruments, and work with the available resources to bring the systems back up as soon as possible. I’ve had to put in some long days fixing problematic instruments.” 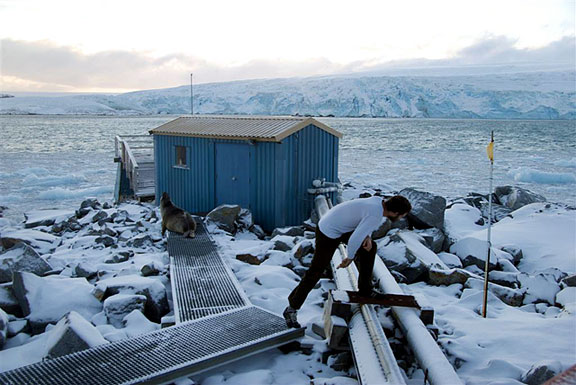 Other duties as assigned

Not everything in the course of the RA’s day is in the original job description.

Fuhrmann finds plenty else around the station that requires repair, pitching in when he has time. There’s such life-sustaining equipment as the Cappuccino maker — no winter-over should be without strong cupfuls of coffee — and a temperamental sewing machine in the station craft room that he’s working on.

Other projects are more Thomas Edison-esque, including construction of a multi-fan system in the station growth chamber, a hydroponic greenhouse, to grow Romaine lettuce, as well as a prototype water-flow sensor for the plant trays. He’s even developed several versions of heated goggles to prevent fogging and icing outdoors with mixed results.

“If you were to take a look at the messy lab bench in front of my desk, you would have to guess that tinkering is also a hobby,” Fuhrmann said.

Scheibe has fallen into a sort of outreach role, fielding questions through his blog, and more recently doing interviews with stateside media, including a conversation with Oprah Winfrey on a special episode featuring Skype calls around the world.

“It was quite unexpected,” he said. “I got called into the station manager’s office, and I thought I was in trouble, but I didn’t really know how much trouble I was in until they told me that I was going to be on national TV representing the whole USAP basically.

“That is not part of the normal RA duties for sure,” he added. “Sometimes you dig a hole, sometimes you talk to a billionaire on national television.”