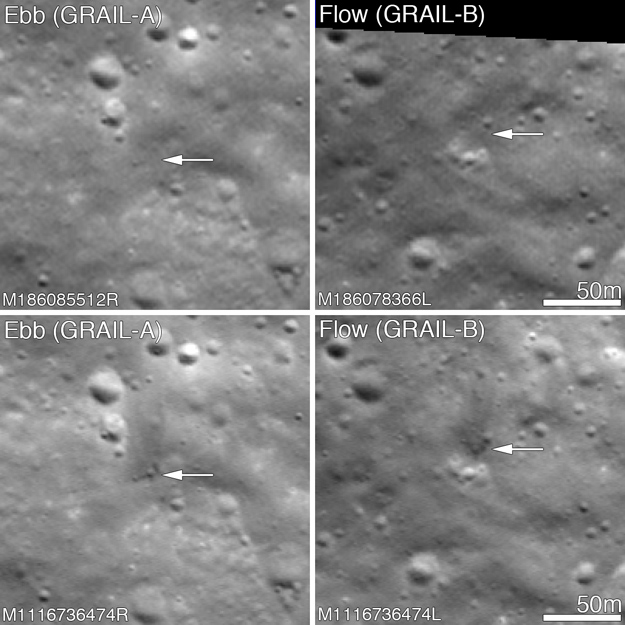 Many spacecraft just fade away, drifting silently through space after their mission is over, but not GRAIL. NASA’s twin GRAIL (Gravity Recovery and Interior Laboratory) spacecraft went out in a blaze of glory on Dec. 17, 2012, when they were intentionally crashed into a mountain near the Moon’s north pole.

The successful mission to study the Moon’s interior took the plunge to get one last bit of science: with the spacecraft kicking up a cloud of dust and gas with each impact, researchers hoped to discover more about the Moon’s composition. However, with the Moon about 380,000 kilometers (over 236,000 miles) away from Earth, the impact plumes would be difficult to observe from here. Fortunately, GRAIL had company. NASA’s Lunar Reconnaissance Orbiter (LRO) is orbiting the Moon as well, busily making high-resolution maps of the lunar surface. With just three weeks notice, the LRO team scrambled to get their orbiter in the right place at the right time to witness GRAIL’s fiery finale.

“We were informed by the GRAIL team about three weeks prior to the impact exactly where the impact site would be,” said LRO Project Scientist John Keller of NASA’s Goddard Space Flight Center in Greenbelt, Md. “The GRAIL team’s focus was on obtaining the highest-resolution gravity measurements possible from the last few orbits of the GRAIL spacecraft, which led to uncertainty in the ultimate impact site until relatively late.”

LRO was only about 100 miles (160 kilometers) from the lunar surface at the time of the impact, and variations in gravity from massive features like lunar mountains tugged on the spacecraft, altering its orbit.

The site was in shadow at the time of the impact, so the LRO team had to wait until the plumes rose high enough to be in sunlight before making the observation. The Lyman Alpha Mapping Project (LAMP), an ultraviolet imaging spectrograph on board the spacecraft, saw mercury and enhancements of atomic hydrogen in the plume.

“The mercury observation is consistent with what the LRO team saw from the LCROSS impact in October 2009,” said Keller. “LCROSS (Lunar CRater Observation and Sensing Satellite) saw significant amounts of mercury, but the LCROSS site was at the bottom of the Moon’s Cabeus crater, which hasn’t seen sunlight for more than a billion years and is therefore extremely cold.”

LRO’s Lunar Reconnaissance Orbiter Camera was able to make an image of the craters from the GRAIL impacts despite their relatively small size.

The two spacecraft were relatively small — cubes about the size of a washing machine with a mass of about 200 kilograms (440 pounds) each at the time of impact. The spacecraft were traveling about 3,800 mph (6,100 kilometers per hour) when they hit the surface.

“Both craters are relatively small, perhaps 4 to 6 meters (about 13 to 20 feet) in diameter and both have faint, dark, ejecta patterns, which is unusual,” said Mark Robinson, LROC principal investigator at Arizona State University’s School of Earth and Space Sciences, Tempe, Ariz. “Fresh impact craters on the Moon are typically bright, but these may be dark due to spacecraft material being mixed with the ejecta.”

“Both impact sites lie on the southern slope of an unnamed massif [mountain] that lies south of the crater Mouchez and northeast of the crater Philolaus,” said Robinson. “The massif stands as much as 2,500 meters [about 8,200 feet] above the surrounding plains. The impact sites are at an elevation of about 700 meters [around 2,300 feet] and 1,000 meters [3,300 feet], respectively, about 500 to 800 meters [approximately 1,600 to 2,600 feet] below the summit. The two impact craters are about 2,200 meters [roughly 7,200 feet] apart. GRAIL B [renamed Flow] impacted about 30 seconds after GRAIL A [Ebb] at a site to the west and north of GRAIL A.”

Lunar Reconnaissance Orbiter complemented the GRAIL mission in other ways as well. LRO’s Diviner lunar radiometer observed the impact site and confirmed that the amount of heating of the surface there by the relatively small GRAIL spacecraft was within expectations. LRO’s Lunar Orbiter Laser Altimeter (LOLA) instrument bounced laser pulses off the surface to build up a precise map of the lunar terrain, including the three-dimensional structure of features like mountains and craters.

“Combining the LRO LOLA topography map with GRAIL’s gravity map yields some very interesting results,” said Keller. “You expect that areas with mountains will have a little stronger gravity, while features like craters will have a little less. However, when you subtract out the topography, you get another map that reveals gravity differences that are not tied to the surface. It gives insight into structures deeper in the Moon’s interior.”

The mission’s press kit, images, and other information about GRAIL:

The research was funded by the LRO mission, currently under NASA’s Science Mission Directorate at NASA Headquarters in Washington. LRO is managed by NASA’s Goddard Space Flight Center in Greenbelt, Md.