The Lunar Reconnaissance Orbiter Camera, or LROC, was able to image five of the six Apollo sites, with the remaining Apollo 12 site expected to be photographed in the coming weeks.

The satellite reached lunar orbit June 23 and captured the Apollo sites between July 11 and 15. Though it had been expected that LRO would be able to resolve the remnants of the Apollo mission, these first images came before the spacecraft reached its final mapping orbit. Future LROC images from these sites will have two to three times greater resolution.

“The LROC team anxiously awaited each image,” said LROC principal investigator Mark Robinson of Arizona State University. “We were very interested in getting our first peek at the lunar module descent stages just for the thrill — and to see how well the cameras had come into focus. Indeed, the images are fantastic and so is the focus.” 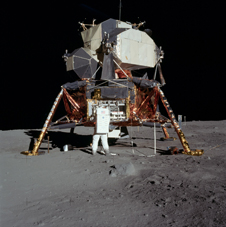 This photograph shows Apollo 11 astronaut Buzz Aldrin in front of the lunar module. The photo helps provide a scale to the LROC images shown above. Credit: NASA/Neil Armstrong
› Larger image

Although these pictures provide a reminder of past NASA exploration, LRO’s primary focus is on paving the way for the future. By returning detailed lunar data, the mission will help NASA identify safe landing sites for future explorers, locate potential resources, describe the moon’s radiation environment and demonstrate new technologies.

“Not only do these images reveal the great accomplishments of Apollo, they also show us that lunar exploration continues,” said LRO project scientist Richard Vondrak of NASA’s Goddard Space Flight Center in Greenbelt, Md. “They demonstrate how LRO will be used to identify the best destinations for the next journeys to the moon.”

The spacecraft’s current elliptical orbit resulted in image resolutions that were slightly different for each site but were all around four feet per pixel. Because the deck of the descent stage is about 12 feet in diameter, the Apollo relics themselves fill an area of about nine pixels. However, because the sun was low to the horizon when the images were made, even subtle variations in topography create long shadows. Standing slightly more than ten feet above the surface, each Apollo descent stage creates a distinct shadow that fills roughly 20 pixels.

The image of the Apollo 14 landing site had a particularly desirable lighting condition that allowed visibility of additional details. The Apollo Lunar Surface Experiment Package, a set of scientific instruments placed by the astronauts at the landing site, is discernable, as are the faint trails between the module and instrument package left by the astronauts’ footprints.

Launched on June 18, LRO carries seven scientific instruments, all of which are currently undergoing calibration and testing prior to the spacecraft reaching its primary mission orbit. The LROC instrument comprises three cameras — two high-resolution Narrow Angle Cameras and one lower resolution Wide Angle Camera. LRO will be directed into its primary mission orbit in August, a nearly-circular orbit about 31 miles above the lunar surface.

Goddard built and manages LRO, a NASA mission with international participation from the Institute for Space Research in Moscow. Russia provided the neutron detector aboard the spacecraft.