Lost asteroid rediscovered with a little help from ESA 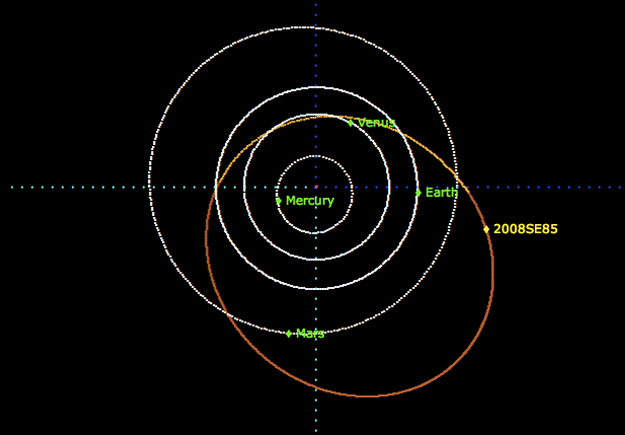 A potentially hazardous asteroid once found but then lost has been rediscovered and its orbit confirmed by a determined amateur astronomer working with ESA’s space hazards programme. The half-kilometre object will not threaten Earth anytime soon.

Amateur astronomer Erwin Schwab, from Germany, conducted his asteroid hunt in September during a regular observation slot at ESA’s Optical Ground Station in Tenerife, Spain, sponsored by the Agency’s Space Situational Awareness programme. He was determined to rediscover the object, known by its catalogue name as 2008SE85. Potentially Hazardous Asteroid 2008SE85 was discovered in September 2008 by the Catalina Sky Survey, and observed by a few observatories to October 2008.

Since then, however, nobody had observed the object and predictions for its current position had become so inaccurate that the object was considered to be ‘lost’.

Erwin planned his observing sequence to look for the object within the area of uncertainty of its predicted position. After only a few hours, he found it about 2* – four times the apparent size of the Moon – away from its predicted position. “I found the object on the evening of Saturday, 15 September, while checking the images on my computer,” says Erwin. “I then saw it again at 01:30 on Sunday morning – and that was my birthday! It was one of the nicest birthday presents.”

These new observations of the roughly 500 m-diameter asteroid will allow a much more accurate determination of its orbit and help confirm that it will not be a threat to Earth anytime soon. Potentially Hazardous Asteroids approach Earth closer than about 7 million km; about 1300 are known. When a new asteroid is discovered, follow-up observations must be done within a few hours and then days to ensure it is not subsequently lost.

Asteroid position measurements are collected from observers worldwide by the US-based Minor Planet Center, which acknowledged the rediscovery of 2008SE85 by releasing a Minor Planet Electronic Circular announcing the new observations.

“These observations were part of the strong collaboration that we have with a number of experienced backyard observers,” says Detlef Koschny, Head of the Near-Earth Object segment of ESA’s Space Situational Awareness programme. “It’s not the first time our collaboration with amateurs has scored such a success. Members of the Teide Observatory Tenerife Asteroid Survey started by Matthias Busch from Heppenheim, Germany, discovered two new near-Earth objects during the last year while working with our observing programme.”