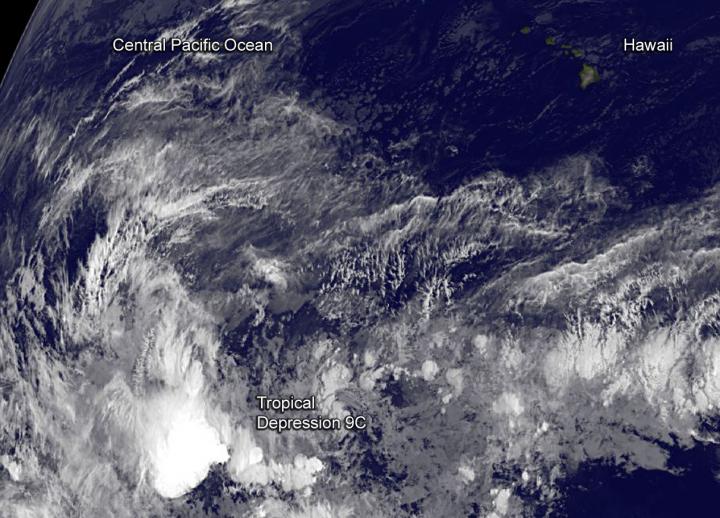 NOAA’s Central Pacific Hurricane Center (CPHC) said that TD9C is the sixteenth tropical system of the year to either form within or pass through the central north pacific basin.

NOAA’s Central Pacific Hurricane Center (CPHC) noted that TD9C’s structure continues to suggest an elongated east to west oriented system. That indicates there likely is still a low-level trough-like (elongated area of low pressure) feature associated with the depression. The CPHC discussion on Dec. 31 said that the trough-like feature is “not unexpected when examining the unusual belt of strong westerly winds south of the equator…as well as the extensive area of 30 knot easterly winds to the north of TD9C.”

Maximum sustained winds are near 35 mph (55 kph) with higher gusts. Little change in intensity is expected during the next couple of days, because of strong easterly vertical wind shear in the area as shown by data from ships. NOAA’s Central Pacific Hurricane Center noted that if TD9C avoids dissipation, it could reach tropical storm strength by Monday, January 4, 2016 as it crosses the International Date Line and moves into the Northwestern Pacific Ocean basin.

TD9C is not near any land areas, so no watches are warnings are in effect. For updated forecasts, visit: http://www.prh.noaa.gov/cphc.