By SpaceRef Editor
May 7, 2013
Filed under Earth, Goddard Space Flight Center, Landsat, US 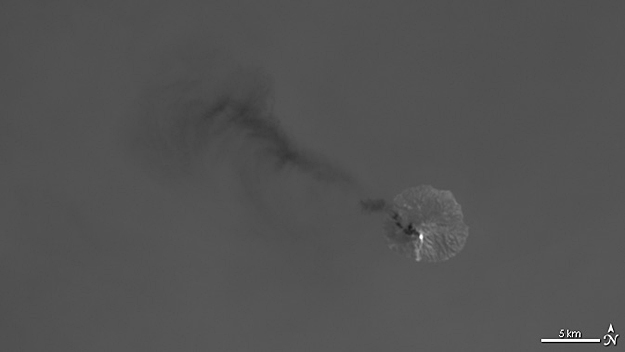 As the Landsat Data Continuity Mission satellite flew over Indonesia’s Flores Sea April 29, it captured an image of Paluweh volcano spewing ash into the air. The satellite’s Operational Land Imager detected the white cloud of smoke and ash drifting northwest, over the green forests of the island and the blue waters of the tropical sea. The Thermal Infrared Sensor on LDCM picked up even more.

By imaging the heat emanating from the 5-mile-wide volcanic island, TIRS revealed a hot spot at the top of the volcano where lava has been oozing in recent months.

The two LDCM instruments, working together, illustrate a quote from Aristotle: The whole is greater than the sum of its parts, said Betsy Forsbacka, TIRS instrument manager at NASA’s Goddard Space Flight Center in Greenbelt, Md.

“Each instrument by itself is magnificent,” she said. “When you put them together, with the clues that each give you on what you’re seeing on Earth’s surface, it’s greater than either could do by themselves.”

The image of Paluweh also illuminates TIRS’ abilities to capture the boundaries between the hot volcanic activity and the cooler volcanic ash without the signal from the hot spot bleeding over into pixels imaging the cooler surrounding areas. TIRS engineers tested and refined the instrument pre-launch to ensure each pixel correctly represents the heat source it images on Earth’s surface. Otherwise, Forsbacka said, it would be like shining a flashlight in your eyes — the bright light can leave you seeing spots and halos where it should be dark. The same effect can occur with detectors.

“We can image the white, representing the very hot lava, and right next to it we image the gray and black from the cooler surrounding ash,” Forsbacka said. “It’s exciting that we’re imaging such diverse thermal activity so well.”

The TIRS instrument can also pick up subtle shifts of temperatures, within a 10th of a degree Celsius. And, with two different thermal bands instead of the one band on previous Landsat satellites, LDCM is poised to make it easier for scientists to subtract out the effects of the atmosphere on the signal, obtaining a more accurate temperature of Earth’s surface.

Taking Earth’s temperature from space can be difficult because the atmosphere gets in the way and alters the thermal signals, Forsbacka said. Scientists looking to estimate surface temperatures with the single thermal band on previous Landsat instruments needed measurements or assumptions about atmospheric conditions.

TIRS has two thermal bands, however. The atmosphere affects each band slightly differently, resulting in one thermal image that’s a hair darker than the other. By measuring that difference, and plugging it into algorithms, scientists can better address atmospheric effects and create a more accurate temperature record of the Earth’s surface.

The Landsat program is a joint mission of NASA and the U.S. Geological Survey. Once LDCM completes its onboard calibration and check-out phase in late May, the satellite will be handed over to the USGS and renamed Landsat 8. Data from TIRS and OLI will be processed, archived and distributed from the USGS Earth Resources and Observation Science Center in Sioux Falls, S.D., for free over the Internet.