By SpaceRef Editor
May 4, 2015
Filed under Earth Science, Jet Propulsion Laboratory, US 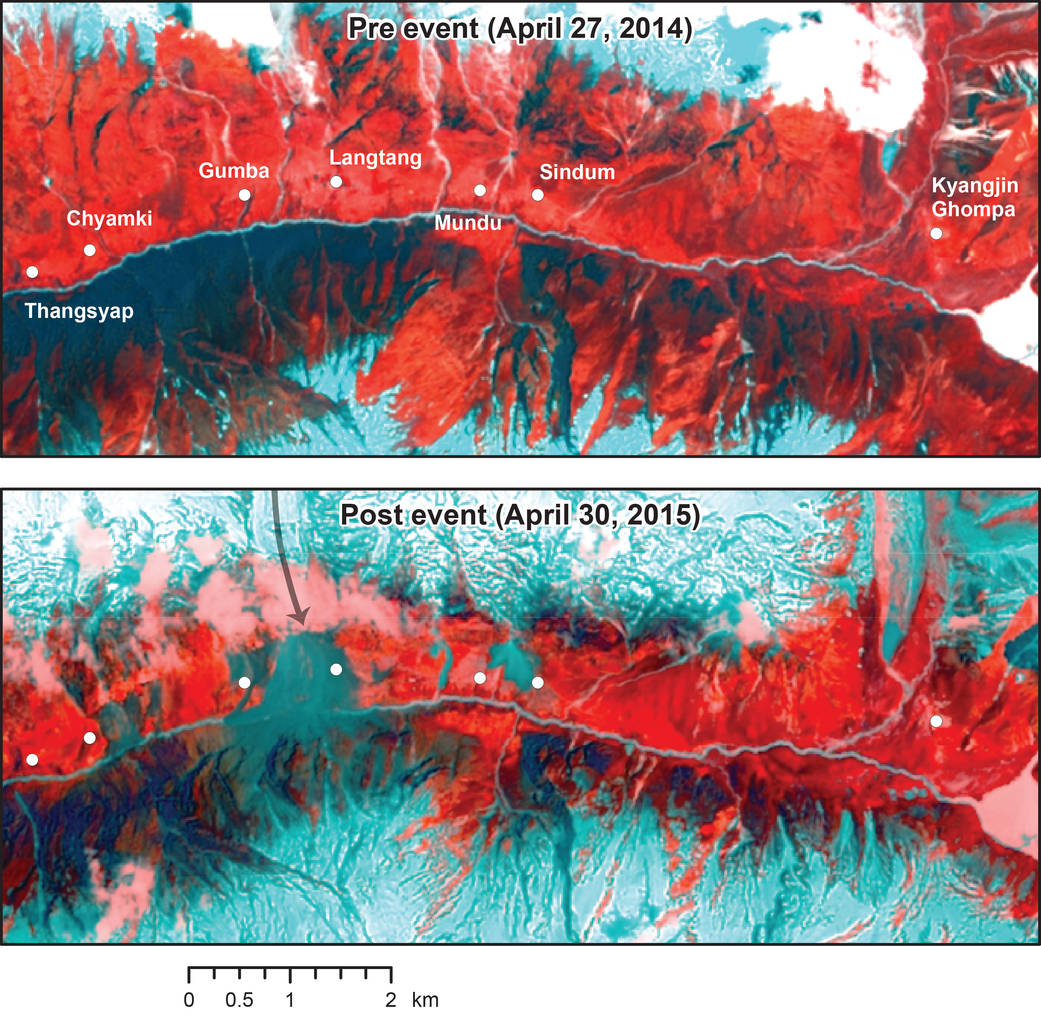 The magnitude 7.8 Gorkha earthquake that struck Nepal on April 25, 2015, caused extensive damage in Kathmandu Valley and severely affected Nepal’s rural areas. The Langtang Valley in the Rasuwa district was particularly hard hit, as became apparent from pictures taken by a rescue helicopter mission on April 26. Numerous tourists and Nepali were, or are, still trapped in the valley as access is completely blocked by avalanches and landslides. The valley’s main village, Langtang , was completely destroyed by the earthquake and the large, wet, debris- and ice-rich avalanche and likely pressure wave from dust avalanche that it triggered, resulting in an unknown number of casualties.  Other avalanches also struck elsewhere in the valley.

Space agencies around the world are providing extensive resources in a huge international effort. They are tasking their satellites to observe the areas hit by the earthquake. This effort began immediately after the disaster. Imaging initially focused on Kathmandu. Following the first social media reporting of the helicopter pilot’s comments, an emergency NASA-USGS-interagency Earthquake Response Team alerted satellite mission operations teams about the likely serious plight of Langtang and other Himalayan valleys.  Advisories were also delivered to Nepal officials.  The first relief missions arrived in the Langtang Valley about April 28.

The analyses revealed the true extent of the disaster that took place in the Langtang Valley. Part of Langtang village was completely buried by a very large rock and ice avalanche that originated on the northwestern slopes above the village. The eastern part of Langtang village appears to have been destroyed by the pressure wave from the related dust avalanche. Large landslides or avalanches also affected the villages of Thyangshyup, Tsarding, Chyamki, Gumba, Mundu, Sindum and Kyangjing. The extent of the damage around these small settlements will require further investigation using higher-resolution imagery to be obtained from satellites, and word from relief crews on the ground. The river at the Langtang village avalanche appears to be blocked, but there is no evidence yet of a lake forming behind the blockage. This may indicate that the water has found its way through the debris, snow and ice. The valley is vulnerable to secondary events such as mudslides and debris and ice avalanches, and this situation could continue into the coming monsoon.  Researchers will continue to monitor this situation closely using satellite data.

These scientists are part of a 35-member international volunteer group led by University of Arizona scientists Jeffrey Kargel and Gregory Leonard, who launched the group soon after the earthquake occurred. This effort has been incorporated into the NASA-USGS-interagency Earthquake Response Team. Their goal is to systematically investigate the entire quake-affected area using remote sensing. Their results will support relief operations and identify secondary hazards, such as glacier lake outbursts, rivers blocked by landslides and other unstable areas.  This is the first volunteer report of the project.