Ok, well, this is it folks, one last email and then I’m on a plane back to LA. I’ve been in New Zealand for a bit and I’ve finally had a chance to type up my notes for this final update about our work in Antarctica. Here we go…

So the last update gave you a sense of the research we’re doing. Now let me give you a sense of life in the field and what it’s like to live, work, and eat in the middle of nowhere in Antarctica. 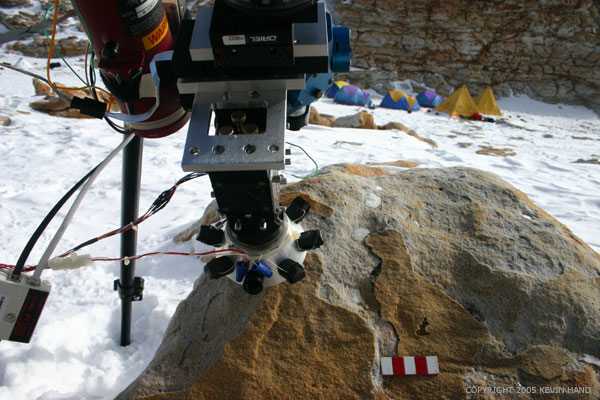 Fig 1. Our mid-infrared spectrometer scans a rock colonized by microbes. The red and white marks on the bar are each 1 centimeter. In the background our camp can be seen. The Scott tents are the large yellow tents on the right.

As you might have guessed, the Scott tents derive their name from the British Antarctic explorer, Robert Falcon Scott, who perished in 1912 along with four other Brits after they reached the South Pole (read Susan Soloman’s ‘The Coldest March’ for one of the most interesting accounts of this expedition). Indeed, three of the five explorers froze to death in -40 C temperatures in a tent very similar to the one Bob and I shared. A great thought just prior to falling asleep. With all due respect to Scott, it was really the Norwegian explorer Fritjof Nansen who drove innovation in exploration technologies. Nansen was the first to use durable pyramid tents (versus stretched A-frames that succomb to wind easily), the first to tout the value of non-cotton, layered clothing, and the first to successfully use pressurized Primus stoves in the Arctic. In brief, Nansen is often, and rightly, considered the ‘Godfather’ of polar exploration. (I highly recommend Roland Huntford’s biography ‘Nansen’.) Needless to say, Bob and I were happy to share a home that bore at least some resemblance to the shelters of the early Antarctic explorers. 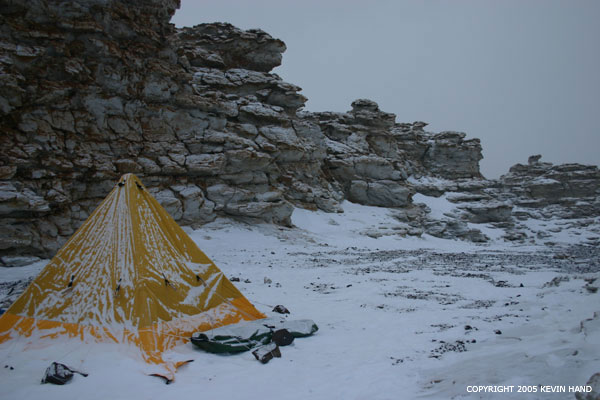 Fig 2. Our comfy little home. The Scott tents have four bars coming down within the tent and form a very sturdy pyramid shape. The height of the tent is roughly seven feet or so.

Sleeping was no problem. While temperatures often got quite cold (perhaps as low as -5 F), our team was well equipped and the human body does quite a good job of adapting to its environment. Interestingly, after our two weeks of sleeping out in tents, we all had a difficult time sleeping well in heated bedrooms back at McMurdo station. It took me several restless nights of adjusting to the heat until I was finally able to sleep well again.

While the temperatures didn’t affect us much, the ever-present light of the Sun definitely threw me for a loop. We were at roughly 77 degrees south in latitude and thus, at this time of year, the sun just keeps circling around the sky above the horizon. I was excited to see how this would affect me and I’ve gotta say that it’s really nice having sunlight 24/7 (though seeing the stars back in New Zealand definitely reminded me of how fantastic the night can be!). I didn’t sleep much most nights and yet I never really felt tired. Every few days I would get a full rest and recharge. I felt like I was operating on more of a ~30 hour day schedule than on a 24 hour day schedule. It was great for getting work done, and as I previously mentioned, Bob, Henry, and I tried to shingle our schedules so we could always have two people up and operating our instruments.

So we each had tents that we called home and then we had a group kitchen tent, a science tent, and a latrine tent. Our field site has no permanent field camp and it is recognized as a very sensitive ecosystem, thus we had to be especially sure that we tread lightly and left no trace of our camp. In practice, this meant that most of what got used in the kitchen tent eventually needed to find a new home in the latrine tent. Yeah, not pretty, but certainly essential to the long-term preservation of the conditions at the site. We had three large steel drums for holding urine and grey water (from dishwashing etc.) and many smaller buckets for holding solid waste. One liter Nalgene bottles were used as temporary urine bottles and later dumped to the large steel drums. Nothing was more of a drag than waking up to the call of Nature only to realize that one’s bottle was already full and frozen…thus requiring a trek out to the latrine tent. (A lesson learned only once by most. Keeping an empty bottle ready by the bedside definitely made for better rest!) 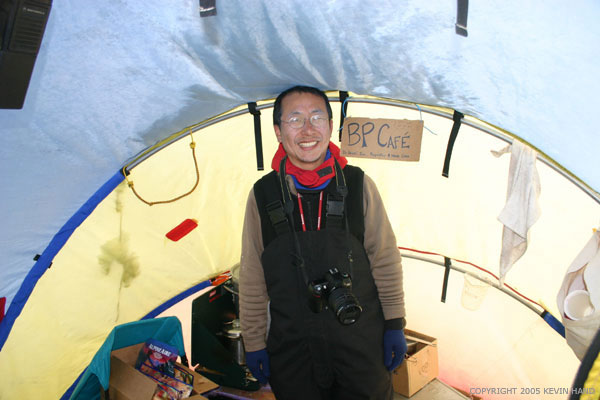 Fig 3. Henry Sun, microbiologist extraordinaire and one heck of a great chef. Our kitchen tent soon became knwn as the ‘BP Cafe’. Granted, clientele were limited, but we were loyal customers.

The kitchen tent was the hub of action and soon after we set up camp the kitchen was given the nickname of the ‘BP Café’ by Chris, I believe. (BP stands for Battleship Promontory.) The head chef was Henry with others (especially Lonne) making welcome guest appearances behind the propane stoves. We ate very well – everything from halibut to pancakes, and even (much to the delight of Bob and I) fresh coffee. 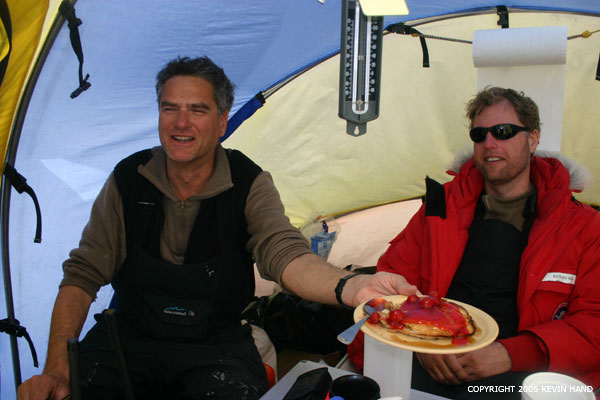 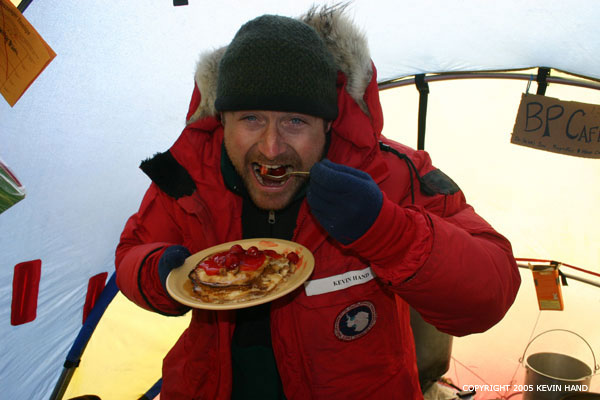 Fig 5. Another satisfied customer at the BP Cafe.

Now given that we’re a bunch of NASA tech geeks, a café isn’t a café unless you have your laptop out and can get some work done while you sip your mocha-frappa-soy-whatsit-latte. Needless to say we did get power into the tent and often had a full suite of laptops up and running, collecting and analyzing data. On a few occasions I think Rho even managed to link up to his server via the Iridium satellite phone. The BP Cybercafe was up and running in full force. 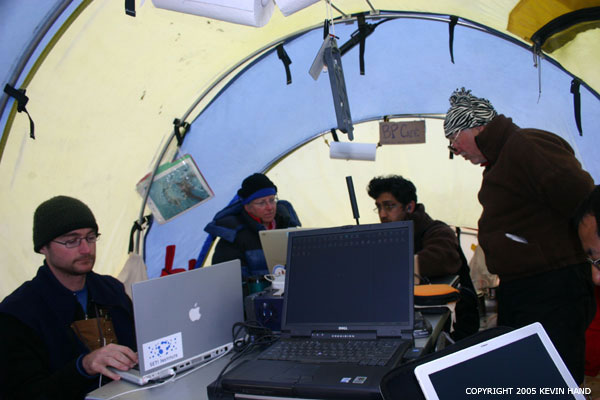 Fig 6. The BP Cybercafe. Outside, the harsh cold environment of Antarctica reigns. Inside, the electrons flow and its business as usual…well, plus the addition of lots of fleece, down, and a week or two of grime from not having showered in a long time.

With the BP Café open all hours of the day, we’d work hard until we got cold and then head into the tent for some hot drinks and food. We actually had phenomenal weather (as can be seen in many of the photographs), but on our last night and full day in camp we got hit with a fantastic snow storm. Both Henry and Chris remarked that a storm of such magnitude was probably quite rare for the region. Henry estimated that it was maybe a 1 in 10 year to 1 in 20 year storm. Remember, this region is called the Dry Valleys and is technically a desert; precipitation of any kind is pretty rare. The snow flakes were large and the winds were pretty low, giving a nice soft storm that reminded me of Vermont. Given that I had spent the holiday period in the lab at JPL, I was especially appreciative of having a pleasant snowstorm. The quietness that typically accompanies such a storm was dramatically increased by the nature of our remote location (no distant sound of snow-plows in the background, that’s for sure!) No sounds short of my occasional sniffles broke the silence. On that night, both Henry and I had a hard time sleeping. We just smiled at the view and talked late into the night. We held out the secret hope that perhaps the helicopters might be delayed a day or two by the weather. Thus requiring us to spend another few days out in the field. 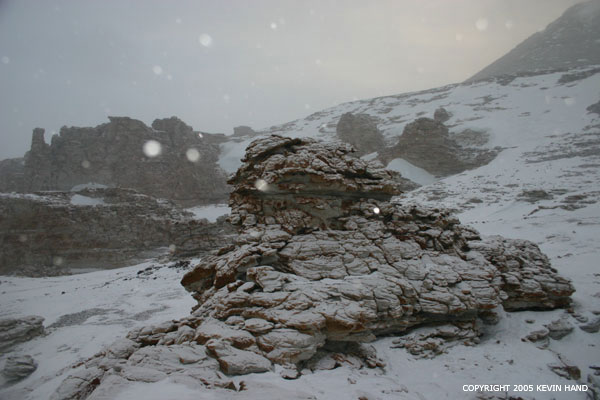 Fig. 7. A snow storm hits Battleship Promontory. The gentle but large storm coated everything with a soft layer of fresh snow.

But such was not the case. By mid-morning of the next day blue sky beat out the clouds and the whap-whap-whap of a distant helicopter could be heard echoing through the valleys. Our campsite was broken down and packed up within a matter of hours and after several helicopters had hauled off most of our stuff and several team members, it was sadly time for me to catch my flight back to McMurdo. The only consolation of getting into the helicopter and leaving was the knowledge that the view of Battleship Promontory from the helicopter would be fantastic. We hopped in and within minutes we were buzzing back through the valleys on our way to the Ross Sea and McMurdo Station. Our time in the field had ended. 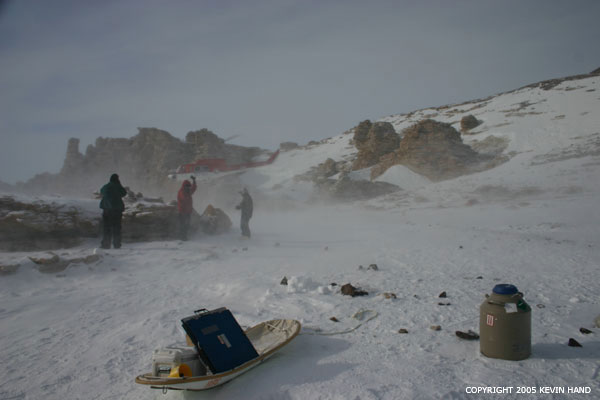 Fig. 8. Breaking camp. A helicopter lands in the background and stirs the fresh snow as we load the sled with gear and prepare to get our equipment out of the field. On the right is our liquid nitrogen dewar. We needed the liquid nitrogen to cool our infrared detector. Antarctica may be cold, but even so, we needed to bring additional ‘coldness’ out into the field for our instruments.

Once back at McMurdo we had the huge task of sorting, cleaning, and shipping anything and everything we had used or brought with us. The support crew and coordination of staff at McMurdo was incredible. It reminded me of a huge version of the outing club at Dartmouth College (where I did my undergrad). Every piece of gear, every pot and pan, every extra grain of salt eventually got cleaned and sorted and readied for the next team to head out into the field. Our science gear was padded, taped, and tagged and at the moment I suspect its rocking gently on a boat in the South Pacific. 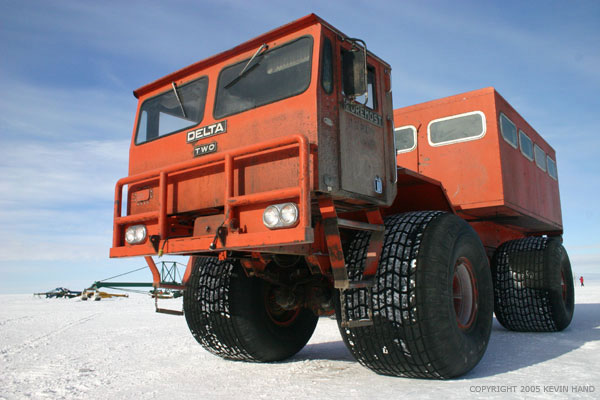 Fig. 9. Public transportation, McMurdo style. These huge people-movers brought us to the ‘terminal’ where we waited for our plane back to New Zealand. The wheels are about the height of an average person.

After a few days of dealing with logistics, our team was given word that we would soon fly back to New Zealand. When the day came we boarded one of the big trucks and headed out to the airstrip. A series of several little huts serve as the ‘terminal’ and we all waited patiently as the freight was unloaded and the C-17 aircraft was refueled for the flight back to Christchurch. The C-17’s are the ‘new’ planes that will be used to transport US Antarctica travelers from now on. Though still a sparse Air Force craft, the comfort felt like a first class flight compared to the flight down on the C-141. Taking off from the ice shelf was sad – after all the hard work, planning and preparation, it was hard to believe that everything had actually happened. We had actually made it out to the field. Our instruments worked very well. Our experiments ran smoothly. We collected lots of great data and explored a fantastic spot on this incredible planet. Now it’s time to go home, process and publish. And in between, my day dreams have lots new memories to play with. 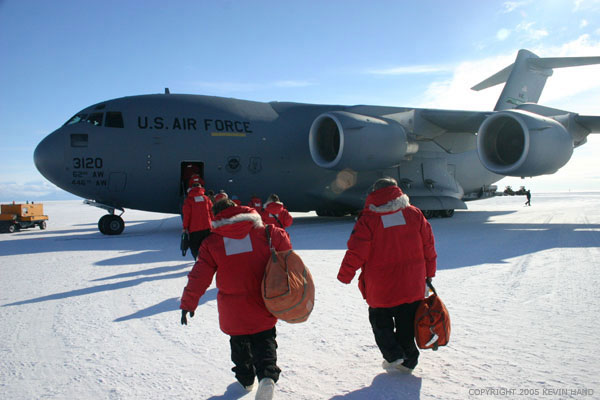 Fig. 10. The C-17 aircraft being loaded up with passengers before flying to Christchurch, New Zealand.

That’s it for stories from the field!

See you back in the US,