By SpaceRef Editor
May 21, 2012
Filed under Ames Research Center, Extrasolar, Kepler, US 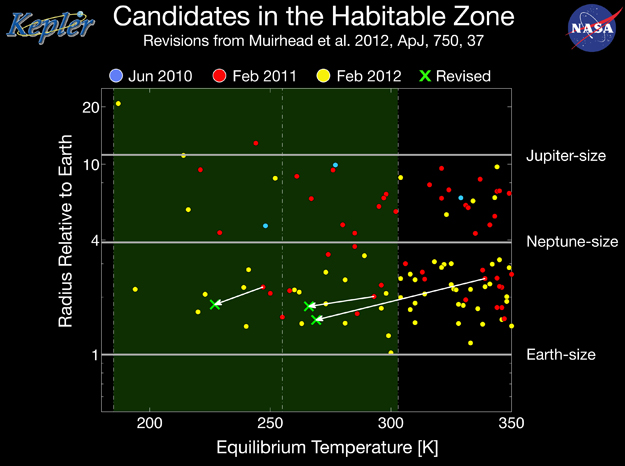 April was a momentous time for the mission! The team received approval for a mission extension through fiscal year 2016, based on a recommendation from NASA’s 2012 Senior Review of Astrophysics Missions. In addition to Kepler, eight other missions were approved. The 2012 NASA Senior Review report is available here.

The extended mission will begin in October 2012. The team has been busy preparing a transition plan to carry the mission through 2016. The extended mission paradigm will be to operate with more dependence on, and service to, the astronomical community. The Kepler exoplanet survey will continue, but, to reduce mission cost, the project will support follow-up observation and analysis only of planet candidates near Earth-size and then produce a reliable catalog of the near Earth-size candidates. In addition to continuing the exoplanet survey, the level of Kepler resources devoted to astrophysical studies will be substantially increased to allow much greater community participation in Kepler science. All Kepler survey data will be available to the community for analysis with no proprietary period.

Extended mission planning and implementation are progressing. Methods and infrastructure to facilitate working groups of community scientists to participate both in the survey operation and analysis of survey results are being developed. The Kepler Guest Observer Office is preparing to support observations proposed by the community, as well as access to archival data. Extended mission follow-up observing plans and procedures will be completed in time for trial use in the summer 2012 observing season, before the first season of the extended mission in early 2013. All other preparations for extended mission operation will be in place and functioning by the beginning of October 2012.

On April 16, during the opening ceremony of the 28th National Space Symposium, the team was awarded the 2012 John L. “Jack” Swigert, Jr., Award for Space Exploration. We are honored and humbled by this prestigious award AND the remarkable video the team at the Space Foundation produced.

Results continue to flow from the data. Recently, two papers of note were published: 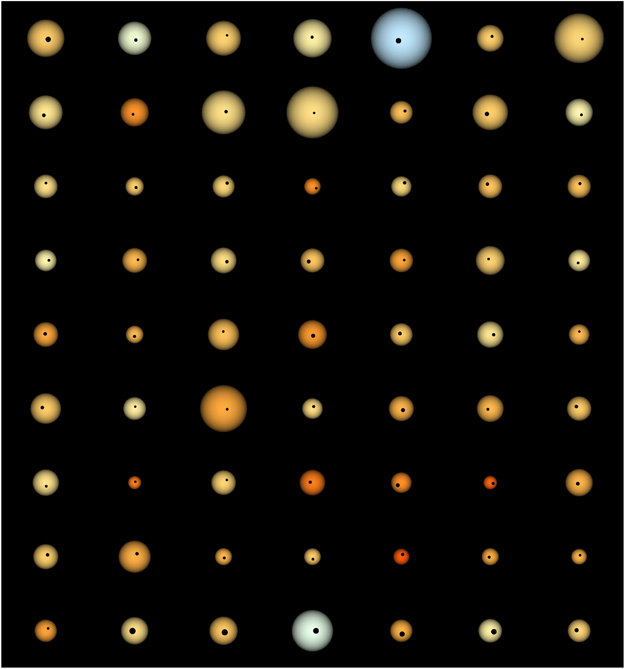 The illustration shows the 63 hot Jupiter systems, planetary systems with Jupiter-size planet candidates in three-day orbits, and their stars as well as approximate stellar colors. Simulated stellar disks and the silhouettes of the transiting planet candidates are all shown at the same relative scale. Credit: Fermilab Center for Particle Astrophysics/J Steffen

As noted in last month’s update, the team continues to monitor increased solar activity as our sun is exhibiting an increase in solar flares and coronal mass ejections (CME). Kepler now has experienced three significant CME events, starting on Day-of-Year (DOY) 23, 27, and 67. The third event was by far the largest; a very small fourth event was observed on DOY 73. The team is pleased to report the spacecraft did not experience any major anomaly. However, the CMEs did impact the quality of the science data collected during the events. The three significant events produced noticeable changes in dark current, discernible pointing excursions, and significant flux variations for all target stars. As a result, the team has chosen to disregard the data collected during these CMEs. This has resulted in data losses of roughly 2.2, 1.0, and 4.6 days, respectively, during the three events. Their long-term impact on the spacecraft and its detectors is still under investigation, but appears to be small and non-threatening to overall mission success.

Our Science Operations Center (SOC) ground system software team continues its busy pace. The SOC 8.1 software release, deployed in March 2012, continues as the baseline pipeline software system, while the team has been focused on readying the SOC 8.2 software release for operations. As noted previously, SOC 8.2 adds features to: (a) improve corrections of the systematic errors in stellar flux time series; (b) improves sensitivity to planetary systems with two transits only; and (c) improves sensitivity to small planets in multiple planet systems. We expect to deploy this capability in late June 2012.

Finally, the Kepler team marked the third anniversary since beginning science operations. On May 12, 2009, we completed the final commissioning activities for the Kepler spacecraft and entered operations. The three years have gone by quickly, and the mission has produced many exciting discoveries. With a mission extension of four years recently granted, we expect that Kepler’s best days – and discoveries, – lie ahead.