Note: Text and photos republished from Katy Quinn’s FMARS page by permission of the author.

The sun has just come out for the first time since I’ve been here, yay!
That bodes well for the chances of planes getting into Devon Island, although
there are other groups that need the planes as well so we have to schedule
around them. We had a number of planes fly into Devon last night
so things are looking up. I may even be flying into Devon Island
later tonight but it will most likely be tomorrow. Once I’m on Devon
I won’t be able to directly post any web journal pages but I shall be sending
reports to the webmaster at the Mars Society, so look for news there:
www.mars.tv,
or arctic.marssociety.org.
I won’t be able to directly access my email either, private messages to
crew members can be sent via mission control at crewmessages@pioneerastro.com,
just put my name in the subject line.

Yesterday I went for a wonderful walk along the bay, following the road
that eventually leads to the garbage dump. The first part of the
walk you’re right beside the bay, it’s still covered with ice except for
a gap right at the edge, with lots of meltwater ponds on top. I was
told it’s still thick enough to travel across but I’ll leave that to the
experts. About 2 miles down the road, a bit inland and up on a rise
overlooking the bay, there is an archeological site. It used to be
a Thule encampment, what was left was a group of hut sites, the huts in
various states of ruin. One hut had been slightly restored to show
how the whale bones were set up to form a frame. The hut was shaped
like an igloo, a couple of meters across. The entry tunnel was cut
into the sod and lined with stone slabs, the tunnel was very narrow and
I don’t think I would have fit through. The floor was set slightly
lower than the surrounding ground with the back half slightly raised, lined
with more stone slabs. The whale bones were set up in a dome shape
and apparently the whole thing was covered in skins to complete the hut.
Looked very cozy. There were about 5 or 6 clearly visible hut sites,
some just the floor remaining.

Near the Thule site there was a more modern ruin, a wreaked DC3.
It was really a mess. Just a little bit of the main body was left,
one wing off to the front and the other wing still vaguely where it should
be. All the metal skin of the wings and the fuselage was ripped away
or in tatters. Only one motor and prop still there, I imagine the
other was salvaged. The wind was making the loose metal rattle and
creak. I had a fanciful thought that it sounded like an echo from
the past of the crash that brought it to Earth for good. The crash
site was lonely, melancholy. With the backdrop of empty rocky hills
it reminded me what an unforgiving place this can be. Feeling the
need for human company, I headed back for Resolute with the wind in my
face and feeling a bit cold after standing around. As luck would
have it, a couple of the local lads drive by in their pickup truck and
offered me a lift back to town. Definitely faster… maybe too fast.

This morning I went on another walk to the top of the big hill above
town. Got a great view of town and the bay, and over the top of the
hill a beautiful view of plains and snow and rocky hills that seemed to
go forever. Very exhilarating. It was a little rough going
because of all the loose rock underfoot. Freezing and thawing has
shattered the local sedimentary rocks into a jumble of plates and rubble,
and where the ground is relatively flat there are meter scales frost heaves.
It feels good to get out and go walking, I’m starting to unwind from some
of the stresses I left in Boston. As nice as it is in Resolute though,
I’m ready to get going to Devon Island and do the work I’m here for.
If you see another web update tomorrow it means I haven’t made it to Devon
yet. If not, I’m on my way! 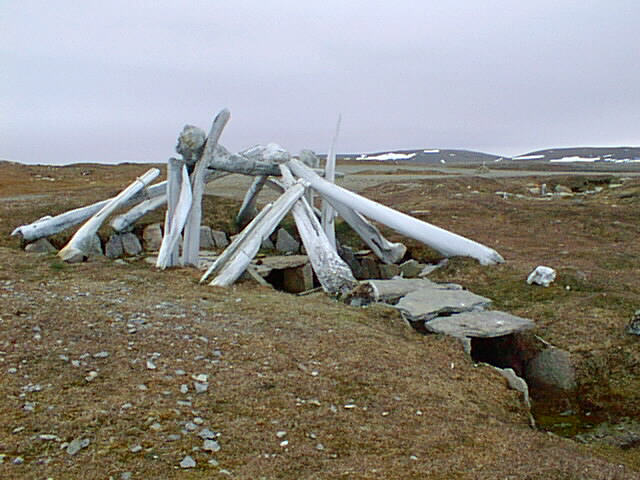 Resolute Bay, from hill above town