Note: Text and photos republished from Katy Quinn’s FMARS page by permission of the author.

Today was a lesson in problem solving and team work.  Today was
also a day for mud baths and Monty Python.  The plan was to head out
onto the plains just inside the Haughton Crater, about half way to Trinity
Lake where we were on Saturday, and deploy Vladimir Pletser’s seismic survey
equipment.  But the best laid plans of mice and Martians were not
to be.  Along the way the EVA crew and their ATVs got stuck in the
mud that is so prevalent here this time of year.  Twice.  It
took about an hour and a half to work themselves free the first time.
Then they got stuck again but practice makes perfect and they were able
to extract themselves in about half an hour.  Unfortunately Vladimir
was not able to conduct a survey within the crater, he was really disappointed.
However Bill Clancey was quite happy to see how the crew interacted to
solve the problem.  Like they say in geophysics, one person’s noise
is another person’s signal.

The day started off with great anticipation.  Last night when the
crew was making it’s plans we agreed that the crater would be the most
interesting place to survey.  However, it might be logistically difficult
to get there and a very long day even if things all worked perfectly.
Charles Cockell, the scientist with the most Haughton Crater field experience,
took my place on the EVA while I acted as the habitat radio operator, the
“capcom” so to speak.  Bill Clancey also had me logging the EVA radio
traffic for his research.  The EVA crew was Vladimir Pletser, Robert
Zubrin, Charles Cockell, and Bill Clancey, who was particularly interested
in documenting how the crew worked together to set things up and perform
the survey.  Getting four people suited up with just a couple of assistants
is a complicated dance, I tried to not step on anyone’s toes.  We’re
becoming old hands at the EVA routine so things went pretty efficiently,
although I don’t think it was very realistic to have 2/3rds of the habitat
crew out on EVA at one time, I’m not sure that would ever happen on a real
Mars mission.  Got them squared away in the airlock around 11 am and
I dashed upstairs to take my place at the radio.  Once they got outside
the habitat and started loading the equipment in the trailer the first
problems surfaced.  One of the ATVs needed fuel and they also needed
some rope to tie down the equipment boxes.  They managed to perform
the fuel up in their space suits and we left a rope in the airlock for
them to pick up.  They hit the road in good time, considering.
Made their way down the side of Haynes Ridge and onto the plains of the
crater.  Then the call came over the airwaves, they were stuck in
the mud.  Vlad’s equipment weights 120 kgs and the trailer has narrower
wheels than the ATVs, there was concern that the trailer wouldn’t handle
the mud as well and it turns out that concern was well founded.  I
heard a little bit about what was going on from Bill Clancey over the radio
but then things got quiet on my end as they obviously got to work and were
too busy keep updating me.  I found out the whole story at the crew
debriefing when they returned later on.  They had to use the other
ATVs with tow ropes to pull out the bogged down ATV and trailer, all the
while slogging through the mud themselves.  It was up to their knees
in places, fortunately the permafrost level hereabouts is quite shallow
so they wouldn’t have sunk much further before hitting the solid layer.

When the lads got back to the hab they were a sorry sight.  Muddy,
cold, wet, sweaty, and exhausted.  Vlad in particular was covered
in mud up to his thighs and up his arms to the elbows.  Apparently
there was slipping and falling going on, digging and pushing, they really
got down and dirty.  When Vlad pulled off his boots he poured out
about a cup of water and when he took off his jacket is was soaked in sweat.
The space suit equipment suffered as well.  Radio antennas were ripped
off, the push to talk radio buttons got clogged, and the helmets were glazed
over with mud.  I was amazed when I first saw them return that they
were able to see through them.  Luckily Bill thought to bring some
paper towels, they were able to wipe them off enough to see to drive the
ATVs.  We will be spending all morning tomorrow cleaning and fixing
equipment.  The EVA room is also coated with mud, we’re letting it
dry so it will be easier to sweep up.  The crew was feeling conflicted
about the whole exercise.  Disappointed they weren’t able to perform
the experiment, frustrated they got stuck in the mud, yet ultimately satisfied
that they were able to pull together and get every person and piece of
equipment back safely.  If only it was later in the season, apparently
all the mud dries out and turns to dust and hard pack.  C’est la vie.

Tonight is the phase 2 crew’s last night in the FMARS habitat.
Bill Clancey cooked up a tasty repast of salmon in white sauce on pasta,
yum.  As we settled into dinner the frustrations of the day started
to dissipate and soon everyone was smiling and joking again.  The
movie of the night was Monty Python and the Holy Grail, my contribution
to the FMARS DVD library.  I hardly needed to watch it again as my
undergrad days at Caltech taught me to quote Monty Python before I’d ever
seen any of their movies.  Last night’s movie was Mars Attacks, appropriate
and ever amusing.  We perpetuated the amusement by saying, “Ack! Ack!”
to each other all day today.  As we get to the end of our stay together
the jokes are flowing more freely and the friendships stronger.  I’ll
be sad to leave.  Just one more day to go and tomorrow night we hand
over to the next crew rotation.  Yet a piece of me will always stay
in FMARS…   namely the sign I made for the toilet door to remind
people to close it and keep the odors therein contained. 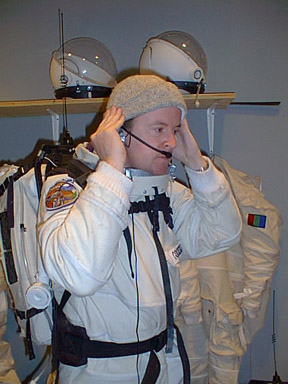 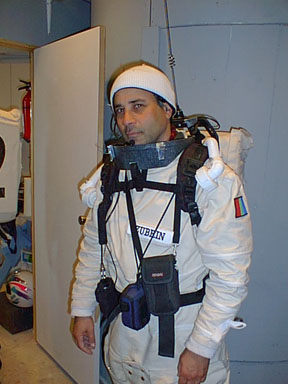 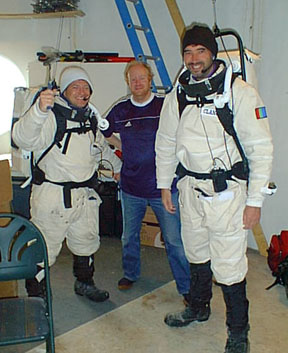 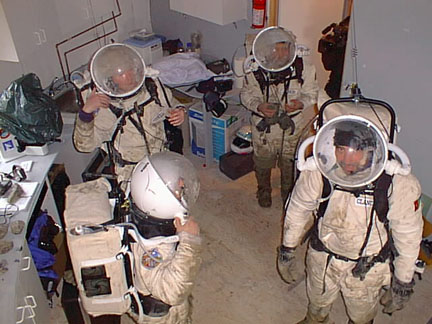 The EVA crew on return, not so sparkly clean. 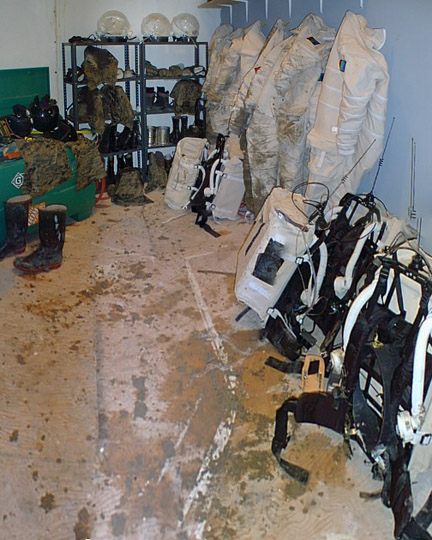 EVA room, post-EVA.  And this was after we’d cleaned up a little
bit.