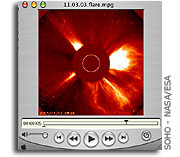 IA. Analysis of Solar Active Regions and Activity from 02/2100Z
to 03/2100Z: Solar activity has been at high levels. Two X-class
events made way for yet another day of impressive major flare
activity. Region 488 (N08W82) produced an X3/2f flare at 03/0955Z
and an X2/2b event at 03/0130Z. Both flares had associated
Tenflares, Type II and IV radio sweeps, and CME’s. The associated
CME with the X3 event didn’t appear to be Earth directed, though the
X2 event may become slightly geoeffective. This Region has shown
some decay over the period although it remains a very magnetically
complex region with delta structures still evident throughout the
spot cluster. Region 486 (S17W75) was limited in flare production
today. The largest flare from this region was an M3/sf that
occurred at 03/1532Z. This region continues to exhibit a very
complex magnetic field and continues to depict a beta-gamma-delta
magnetic class structure. No new regions were numbered today.

IB. Solar Activity Forecast: Solar activity is expected to be at
high levels through day one. Regions 486 and 488 are due to exit
the disk beginning on day two which should significantly drop flare
activity by day three of the period.

IIB. Geophysical Activity Forecast: The geomagnetic field is
expected to range from quiet to severe storm levels through day one
of the period. A full halo CME resulting from the X8/2b event from
yesterday is expected to arrive early in the period on day one.
Additional data from SOHO/LASCO imagery indicates that there was
significant deceleration of the CME. Predominantly active
conditions are expected on day two with isolated minor storm levels
expected. Day three should see a return to unsettled to active
levels. The greater than 10 MeV proton event should drop below
alert levels by day two.