INTEGRAL TOO observation of V0332+53 in outburst

The High-Mass X-ray Binary V 0332+53 (EXO 0331+530), currently undergoing a dramatic outburst, was a Target of Opportunity (TOO) for an INTEGRAL observation on 6-10 January 2005. The source was observed as soon as allowed by visibility constraints on 6 January in staring mode and then in the hexagonal dithering mode for a total of about 110 ksec. 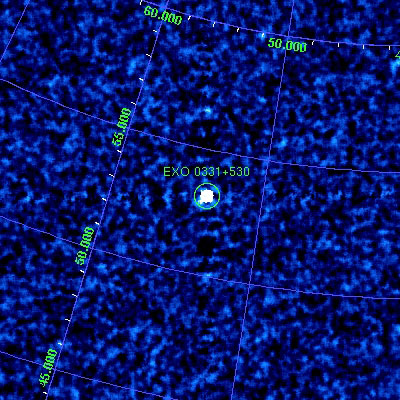 The current outburst reaches a flux of about 1 Crab in the X-rays (3-10 keV). The V 0332+53 flux increased steadily between the end of November 2004 and New Year 2005 as can be seen on the RXTE All Sky Monitor (ASM) light curve provided by the Massachusetts Institute of Technology (MIT).

A preliminary analysis of the INTEGRAL data at the ISDC produced a high signal to noise very steep spectrum featuring 3 cyclotron lines (Soldi et al., 2005, ATel #382). This is one of the best cyclotron line spectrum ever obtained and confirms the lines discovered with RXTE by Coburn et al. (2005, ATel #381).

Due to the absence of an accepted TOO proposal for such an event and to the general interest of the source, the INTEGRAL Project Scientist decided to make the data immediately available to the public.

Details can be found at the ISDC TOO page