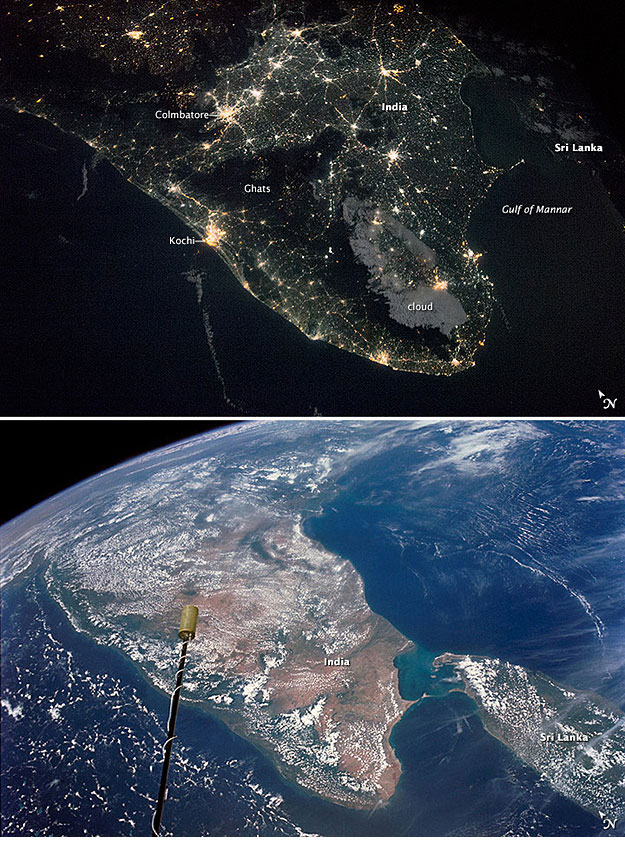 Two photographs taken by astronauts—one in daylight and one at night—show the peninsula of southern India. Astronauts pass from the day side of the planet to the night side sixteen times every 24 hours and therefore quickly adapt to the very different visual conditions of night and day.

The night image, taken recently from the International Space Station (ISS), shows with clarity and surprising detail the human geography of cities of different sizes, such as Kochi and Coimbatore, and the highways that connect cities. The almost unpopulated hilly escarpment, known as the southern Ghats, is a dark zone parallel to the coast. A patch of clouds are illuminated by a nearly-full moon.

The daylight panorama was taken by the crew of the Gemini 11 spacecraft (September 1966) and shows coastlines and land surface color, but no details of human geography. This classic view was taken on an early space flight at a similar altitude to that of the ISS. Patterns of bright white cloud cover much of the land surfaces of India and Sri Lanka.

Astronaut photograph S66-54677 was acquired on September 14, 1966, using a 70 mm lens on a modified Hasselblad film camera. Astronaut photograph ISS042-E-135100 was acquired on January 12, 2015, with a Nikon D4 digital camera using a 28 millimeter lens, and is provided by the ISS Crew Earth Observations Facility and the Earth Science and Remote Sensing Unit, Johnson Space Center.

The image was taken by the Expedition 42 crew. It has been cropped and enhanced to improve contrast, and lens artifacts have been removed. The International Space Station Program supports the laboratory as part of the ISS National Lab to help astronauts take pictures of Earth that will be of the greatest value to scientists and the public, and to make those images freely available on the Internet. Additional images taken by astronauts and cosmonauts can be viewed at the NASA/JSC Gateway to Astronaut Photography of Earth. Caption by M. Justin Wilkinson, Texas State University at NASA-JSC.