Image: Toshka Lakes in Southern Egypt As Seen From Space 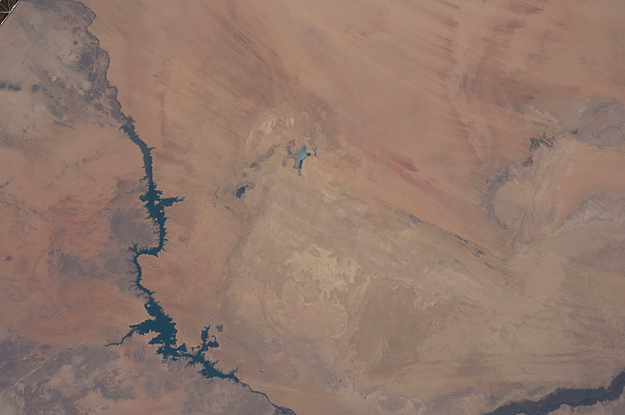 Toshka Lakes in southern Egypt are featured in this image photographed by an Expedition 31 crew member on the International Space Station. The Toshka Lakes (center) were formed in the Sahara Desert of Egypt by water from the River Nile conveyed from Lake Nasser by a canal to the Toshka Depression.

Flooding of the Toshka Depression had created the four main lakes with a maximum surface area in 2002 of approximately 1,450 square kilometers around 25.26 billion cubic meters of water. By 2006 the stored water was reduced by 50 per cent and by 2012 shows open water only in the lowest parts of the main western and eastern basins-representing a reduction in surface area to 307 square kilometers – nearly 80 per cent smaller than the 2002 surface area. Standing water is almost completely absent from the central basin. From space, astronauts documented the first lake “the easternmost one” in 1998.

The lakes progressively grew in depressions to the west, the westernmost filling between 2000 and 2001. This image shows lines of center-point agricultural fields near the east-basin lake nearest Lake Nasser. Sunglint on the western lake makes the water surface appear both light and dark, depending on which parts of the surface were ruffled by the wind at the moment the image was taken. ISS031-E-148455 (21 June 2012) — high res (0.7 M) low res (50 K)