Image: The Fractured Features of Ladon Basin on Mars 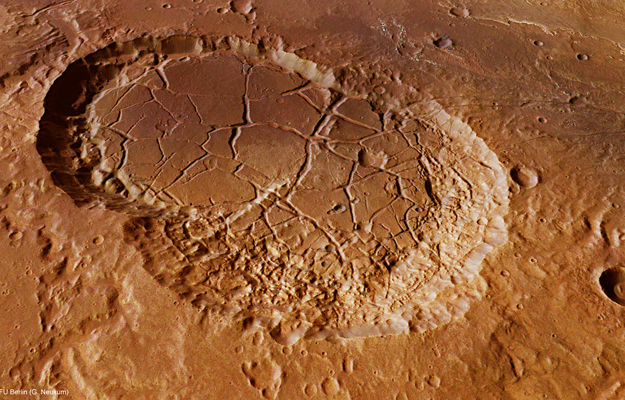 ESA’s Mars Express has observed the southern part of a partially buried approx. 440-km wide crater, informally named Ladon basin. The images, near to where Ladon Valles enters this large impact region reveal a variety of features, most notably the double interconnected impact craters Sigli and Shambe, the basins of which are criss-crossed by extensive fracturing.

This region, imaged on 27 April by the high-resolution stereo camera on Mars Express is of great interest to scientists since it shows significant signs of ancient lakes and rivers. Both Holden and Eberswalde Craters were on the final shortlist of four candidate landing sites for NASA’s Mars Science Laboratory, which is due now to land in Gale Crater on 6 August. Large-scale overview maps show clear evidence that vast volumes of water once flowed from the southern highlands. This water carved Ladon Valles, eventually flowing into Ladon basin, an ancient large impact region.

Elliptical craters like this 16 km-wide example are formed when asteroids or comets strike the surface of the planet at a shallow angle. Scientists have suggested that a fluidised ejecta pattern indicates the presence of subsurface ice which melted during the impact. Subsequent impacts have created a number of smaller craters in the ejecta blanket.

The interconnected craters Sigli and Shambe are thought to have formed later when an incoming projectile split into two pieces just before impact. The joined craters were then partly filled with sediments at some later epoch.