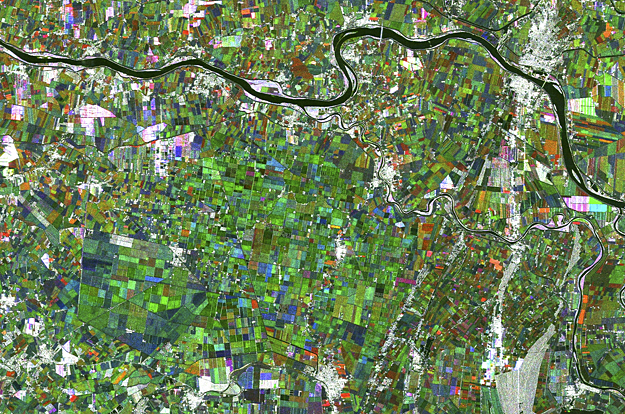 This image shows the Po River, which flows over 650 km from west to east across northern Italy as the country’s longest river. Agriculture is one of the main economic uses of the Po Basin because of the fertile soils, and this image clearly shows a landscape dominated by fields. Cereals, including rice, and a variety of vegetables are common products from this area.

As the river nears the Adriatic Sea, it creates a wide delta with hundreds of small channels. This most recent part of the delta was created in the early 17th century, when Venice diverted its channel from north to south at Porto Viro – pictured here as a cluster of white dots in the upper-right corner. This was done to stop the migration of the river towards the Venetian lagoon.

Branching off of the river in the centre of the image and snaking through the landscape to the lower-right corner is the Po di Goro, one of the main channels of the Po Delta. The section of the main river pictured and the Po di Goro form the border of the Italy’s Veneto (north) and Emilia-Romagna (south) regions.

In the lower-right corner, the lighter-coloured area is a protected nature reserve. This image is a compilation of three radar images from the Japanese ALOS satellite acquired on 24 September 2009, 12 May 2010 and 27 June 2010. Larger image.