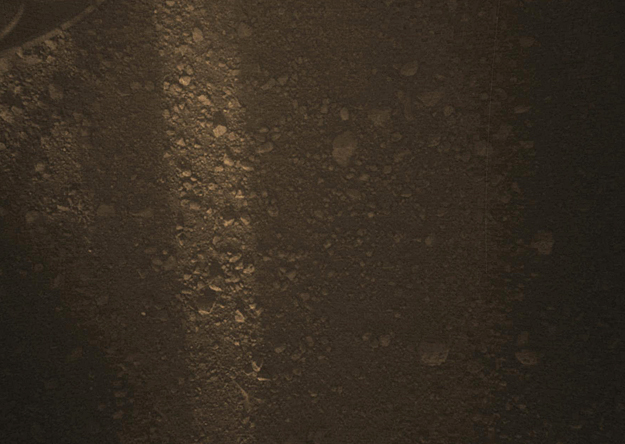 This full-resolution color image from NASA’s Curiosity Rover shows the pebble-covered surface of Mars. It was taken by the Mars Descent Imager (MARDI) several minutes after Curiosity touched down on Mars.

The camera is about 30 inches (70 centimeters) from the surface as the rover sits on the ground. The image pixel scale is about 0.02 inches (0.5 millimeters), but the camera is slightly out of focus at this distance, so the actual ground scale is about 0.06 inches (1.5 millimeters). A sliver of sunlight passing through the structure of the rover illuminates the surface. The largest rock fragment in the image is about 2 inches (5 centimeters) long. Most are much smaller. A rover wheel is visible at the top left.

This is the 1,008th image that MARDI took. The original image from MARDI has been geometrically corrected to look flat. Curiosity landed inside of a crater known as Gale Crater.