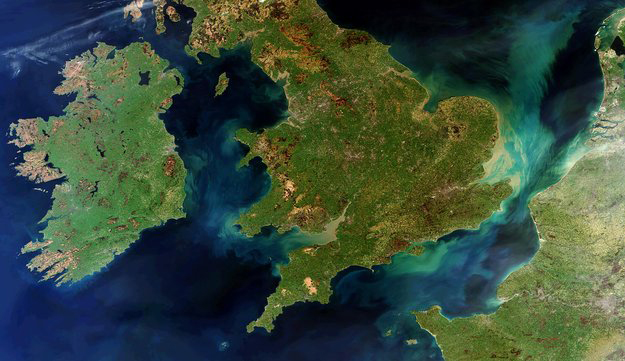 The lush landscapes of Ireland, Great Britain and northern France are pictured in this rare cloud-free view from the Envisat satellite.

Ireland enjoys a mild climate, which is influenced by the Atlantic Ocean (to the left) and the presence of the Gulf Stream. Southwesterly winds from the Atlantic result in high rainfall figures in the northwest, west and southwest of the country.

In the lower-right corner, the river Seine flows through Paris (seen here as a grey area) and snakes toward the English Channel.

Following mainland Europe’s coastline north, we can see the Rhine-Meuse-Scheldt delta followed by part of the intertidal Wadden Sea in the extreme top-right corner.

The green and tan-tinted swirls in the seas and channels are due to sediments being transported in the water. Sediment is particularly concentrated around Britain’s southeastern coast, carried by the River Thames through London and into the North Sea.