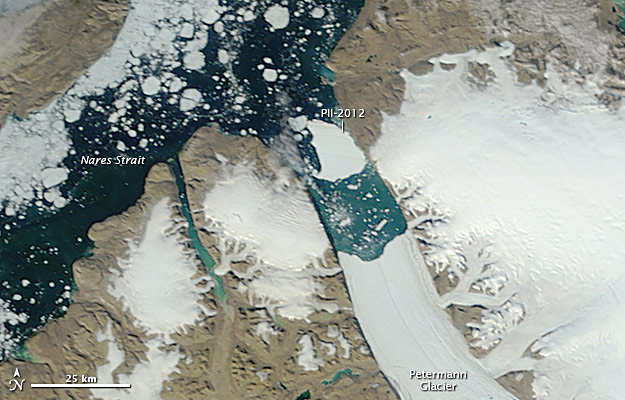 The giant iceberg that broke off Greenland’s Petermann Glacier in mid-July 2012 continued moving down the fjord at the end of the month. The Moderate Resolution Imaging Spectroradiometer (MODIS) on NASA’s Terra satellite captured this natural-color image on July 30, 2012.

By the time MODIS acquired this image, the iceberg–named PII-2012–had traveled roughly 22 kilometers (14 miles) from the edge of the Petermann Glacier and had rotated counter-clockwise. Andreas Muenchow, associate professor of physical ocean science and engineering at the University of Delaware, tracked the progress of the iceberg on his Icy Seas blog. On July 31, he reported that the iceberg’s speed had increased from 1 kilometer per day to 2 kilometers per day. He expected the iceberg to exit the fjord and enter Nares Strait around August 4.