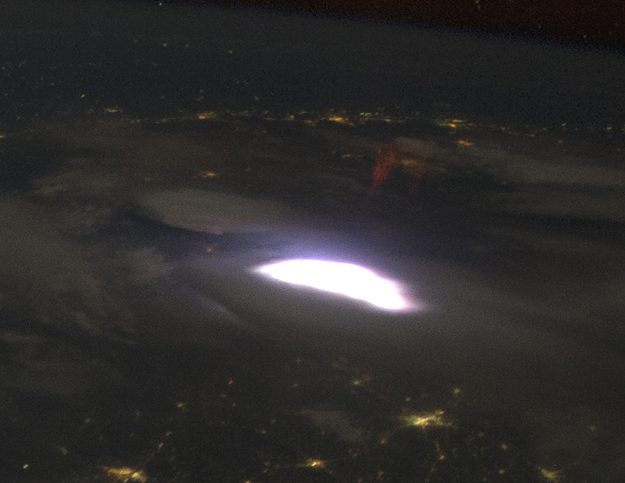 They were once so elusive that scientists gave them a mystical name. “Red sprites” are short-lived, red flashes that occur about 80 kilometers (50 miles) up in the atmosphere. With long, vertical tendrils like a jellyfish, these electrical discharges can extend 20 to 30 kilometers up into the atmosphere and are connected to thunderstorms and lightning.

These images of a red sprite were captured with a digital camera by Expedition 31 astronauts on the International Space Station as they traveled southeast from central Myanmar (Burma) to just north of Malaysia. The still images are part of a time-lapse movie collected from 13:41 to 13:47 Universal Time on April 30, 2012. (View the entire sequence here.) The sprite occurs about 6 seconds into the video, above a bright, wide lightning flash in the upper right quadrant.

Red sprites are difficult to observe because they last for just a few milliseconds and occur above thunderstorms–meaning they are usually blocked from view on the ground by the very clouds that produce them. They send pulses of electrical energy up toward the edge of space–the electrically charged layer known as the ionosphere–instead of down to Earth’s surface. They are rich with radio noise, and can sometimes occur in bunches.

For decades, pilots reported seeing ephemeral flashes above storms, but it was not until the 1990s that scientists were able to verify the existence of these electrical discharges. A sprite was first photographed by accident from an airplane in 1989, and observers on the space shuttle captured several more images with low-light cameras in 1990 and in subsequent missions. Viewers on the ground can occasionally photograph sprites by looking out on a thunderstorm in the distance (often looking out from high mountainsides over storms in lower plains.)

Astronaut photographs ISS031-E-10711, ISS031-E-10712, and ISS031-E-10713 were acquired on April 30, 2012. Additional images taken by astronauts and cosmonauts can be viewed at the NASA/JSC Gateway to Astronaut Photography of Earth. Caption by Michael Carlowicz.