Image: City Lights Illuminate the Nile As Seen From Space 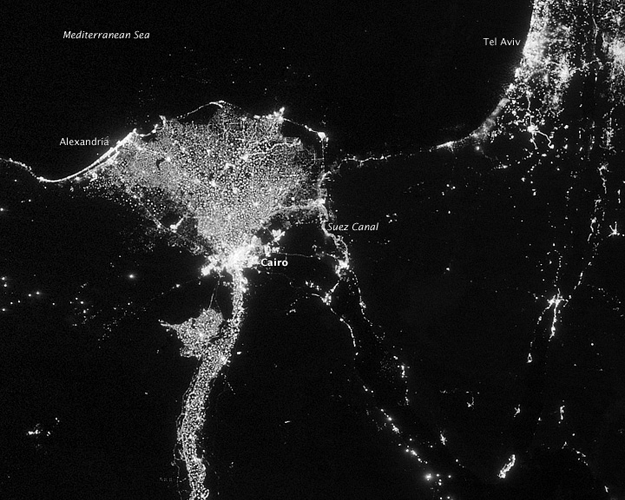 The Nile River Valley and Delta comprise less than 5 percent of Egypt’s land area, but provide a home to roughly 97 percent of the country’s population. Nothing makes the location of human population clearer than the lights illuminating the valley and delta at night.

On October 13, 2012, the Visible Infrared Imaging Radiometer Suite (VIIRS) on the Suomi NPP satellite captured this nighttime view of the Nile River Valley and Delta. This image is from the VIIRS “day-night band,” which detects light in a range of wavelengths from green to near-infrared and uses filtering techniques to observe signals such as gas flares, auroras, wildfires, city lights, and reflected moonlight.

The city lights resemble a giant calla lily, just one with a kink in its stem near the city of Luxor. Some of the brightest lights occur around Cairo, but lights are abundant along the length of the river. Bright city lights also occur along the Suez Canal and around Tel Aviv.

Away from the lights, however, land and water appear uniformly black. This image was acquired near the time of the new Moon, and little moonlight was available to brighten land and water surfaces. Learn more about the VIIRS day-night band and nighttime imaging of Earth in our new feature story: Out of the Blue and Into the Black.

NASA Earth Observatory image by Jesse Allen and Robert Simmon, using VIIRS Day-Night Band data from the Suomi National Polar-orbiting Partnership. Suomi NPP is the result of a partnership between NASA, the National Oceanic and Atmospheric Administration, and the Department of Defense. Caption by Michon Scott.