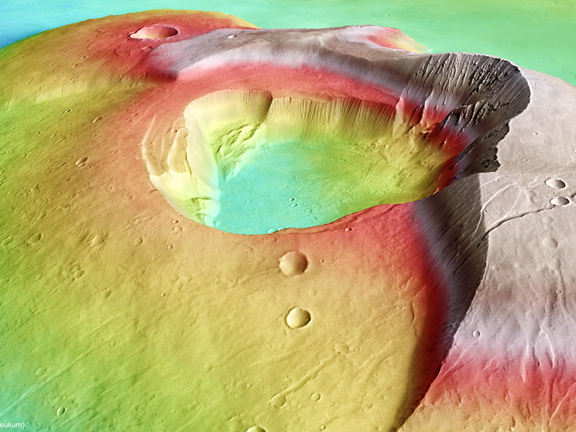 The latest image released from Mars Express reveals a large extinct volcano that has been battered and deformed over the aeons.

By Earthly standards, Tharsis Tholus is a giant, towering 8 km above the surrounding terrain, with a base stretching over 155 x 125 km. Yet on Mars, it is just an average-sized volcano. What marks it out as unusual is its battered condition.

Shown here in images taken by the HRSC high-resolution stereo camera on ESA’s Mars Express spacecraft, the volcanic edifice has been marked by dramatic events.

At least two large sections have collapsed around its eastern and western flanks during its four-billion-year history and these catastrophes are now visible as scarps up to several kilometres high.

The main feature of Tharsis Tholus is, however, the caldera in its centre.

It has an almost circular outline, about 32 x 34 km, and is ringed by faults that have allowed the caldera floor to subside by as much as 2.7 km.

It is thought that the volcano emptied its magma chamber during eruptions and, as the lava ran out onto the surface, the chamber roof was no longer able to support its own weight.

So, the volcano collapsed, forming the large caldera.

November is a busy month for Mars exploration: Russia and NASA both plan launches this month.

Russia’s Phobos-Soil (formerly known as Phobos-Grunt) is designed to land on Phobos, the larger of Mars’ two moons, to collect samples, and return them to Earth in 2014. It also carries the first Chinese spacecraft to Mars, Yinghuo-1.

Mars Express HRSC digital elevation models of Phobos were used by Russian scientists to assess the mission’s potential landing sites and ESA is also providing telecommunications support for both Phobos-Soil and Yinghuo-1.

In return, the European scientific community will have access to data obtained by both spacecraft.

NASA’s mission is the Mars Science Laboratory, a large rover known as Curiosity, with experiments designed to detect organic molecules – past or present – on the Red Planet.

Also worth noting is the simulated Mars mission, Mars500, which ended on Friday when the hatch was opened for the first time since June 2010. For 520 days, the international crew had been working in a simulated spacecraft in Moscow.