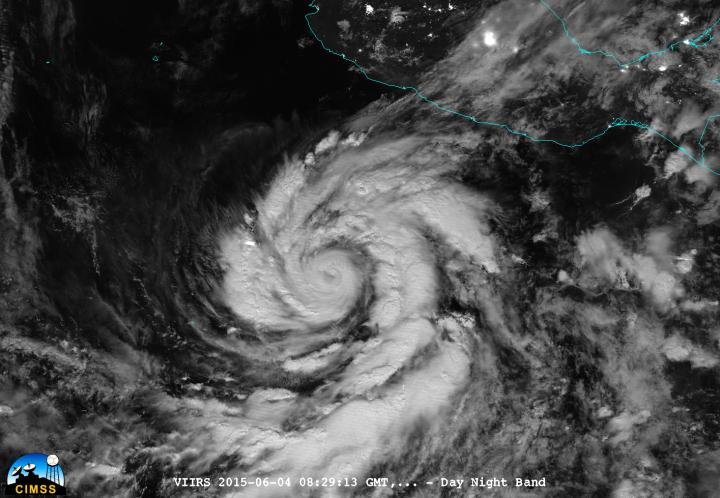 One of the instruments that flies aboard NASA’s Aqua satellite looks at tropical cyclones using infrared light. In a comparison of infrared data from June 3 and 4, images show that Hurricane Blanca had weakened and became less organized.

The Atmospheric Infrared Sounder or AIRS instrument that flies aboard NASA’s Aqua satellite measured cloud top temperatures in Blanca on June 3 at 20:17 UTC (4:23 p.m. EDT) when maximum sustained winds were near 140 mph (220 kph) with higher gusts. At the time, Blanca was a category 4 hurricane on the Saffir-Simpson Hurricane Wind Scale. The AIRS data showed a concentrated ring of powerful thunderstorms around a pinhole eye. Because infrared data measures temperature, AIRS saw that cloud top temperatures in the thunderstorms surrounding the tiny eye were as cold as -81.6F/-63.1C.

When Aqua passed over Blanca the following day, June 4 at 08:36 UTC (4:36 a.m. EDT) AIRS captured more information about the structure and cloud top temperatures. That satellite overpass showed that the bands of thunderstorms spiraling into the center had become fragmented and the pinhole eye that was visible on June 3 had disappeared from the AIRS image on June 4. At the time of the image, Blanca’s maximum sustained winds had dropped to 125 mph (205 kph). The 4 a.m. EDT discussion from the National Hurricane Center (NHC) noted “It is not clear whether the slight decrease in wind speed is a result of an eyewall replacement cycle, drier air wrapping into the circulation, or upwelling of cooler waters beneath the nearly stationary hurricane.”

At 08:29 UTC (4:29 a.m. EDT), the VIIRS or Visible Infrared Imaging Radiometer Suite (VIIRS) instrument aboard NASA-NOAA’s Suomi satellite captured an infrared night-time picture of Hurricane Blanca several hundred miles west of the Mexican coast. The VIIRS image showed what appeared to be a cloud-filled eye and confirmed the bands of thunderstorms wrapping into it had become more fragmented.

On June 4, in the 11 a.m. EDT discussion, the NHC noted that “It appears that the combination of upwelling and an eyewall replacement cycle has resulted in significant weakening of Blanca during the past 18 hours or so. The eye is not as clear as it was yesterday, and the deep convection is no longer symmetric around what is left of the eye.”

Blanca is close enough to land to cause dangerous ocean swells. The National Hurricane Center cautioned that swells generated by Blanca will likely affect portions of the coast of southwestern Mexico during the next couple of days. These swells are likely to cause life-threatening surf and rip current conditions.

Maximum sustained winds have decreased to near 110 mph (175 kph) with higher gusts. Blanca is moving toward the northwest near 3 mph (6 kph), and this general motion with an increase in forward speed is expected during the next 48 hours.

NHC noted that Blanca is forecast to re-strengthen some during the next 48 hours before starting to weaken again when it runs into increasing shear and cool waters as the storm approaches the Baja California peninsula. For the latest forecast updates, visit: http://www.nhc.noaa.gov.