By SpaceRef Editor
December 22, 2012
Filed under Earth, polar, The Antarctic Sun, US 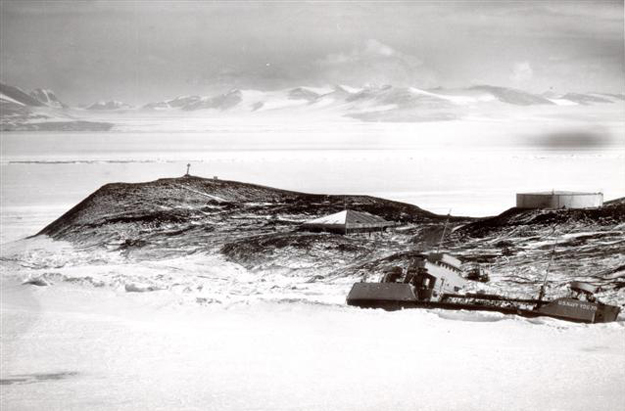 Historic Hut Point near McMurdo Station during the 1960-61 summer. The Antarctica Society was founded in Washington D.C. around the same time. The organization preserves the past as it attempts to remain strong into the future. Photo Credit: Bruce Raymond/Antarctic Photo Library

By Guy G. Guthridge, Special to the Antarctic Sun: Socializing was the word when I joined the Antarctican Society in the 1970s after hiring on for what became a career with the National Science Foundation’s U.S. Antarctic Program (USAP) . The Society had started in Washington, D.C., just after the 1957-1958 International Geophysical Year (IGY) . With lots of local members, it ran impressive monthly evening lectures, annual memorial presentations, and an austral mid-winter picnic, all in the D.C. area. Few members dared miss these events.

As the USAP grew, the participant population became more diverse. The “local club” approach to running the Society stopped working. Long-time member Paul Dalrymple, a micrometeorologist during the IGY, reinvented the newsletter, and in the mid-1970s his energetic issues swiftly raised membership back to more than 600 from around the United States and abroad.

The letters captured the spirit of their age and at times achieved the level of art. Consider two articles. Mildred Crary — an editor and writer and the wife of polar geophysicist A.P. Crary — wrote one; and Paul, the other. Both papers were published in a single issue in 1978. 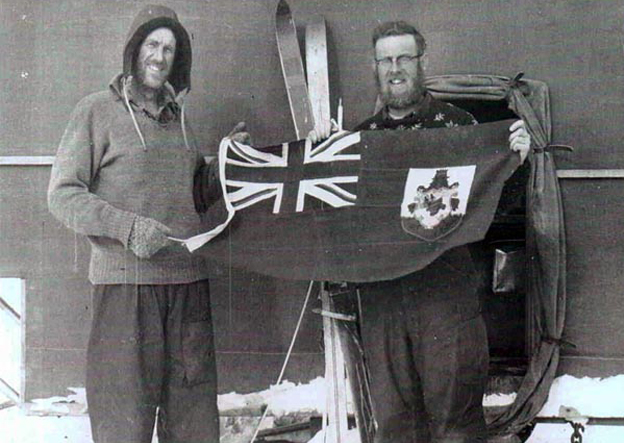 Women were finally working in Antarctica in significant numbers by then, and a woman was about to winter at Amundsen-Scott South Pole as the station physician. Mildred’s It’s About Time was one of the earliest descriptions of how women broke down the gender barrier in Antarctic. “Yes,” she concluded, “it’s about time — to start taking it for granted that qualified people, male or female, go to the Antarctic, whether as glaciologists, biologists, doctors, journalists, distinguished visitors, stewardesses, or support staff members.”

Paul’s The End of a (Great) Era followed. “Antarctica,” he wrote, “was really made for men, stout-hearted men like those they sing songs to and tell tales about and drink beer to when men gather together. Antarctica had to be made for men. Why else would it have been placed at the bottom of the earth, why else would it be so desolate and so cold and so deep with snow, and why else would it be guarded by thick packs of ice with fierce seas beyond them?”

The newsletters achieved fame back then, and raised eyebrows. “If you don’t like my newsletter,” Paul responded, “write your own newsletter.” But in 2012, Paul told me, “no one actually asked me to change my writing style,” and “no one [else] ever said that they wanted to write it.”

Times did change, though, and so did the Antarctican Society. By 1998, Paul — always an indispensible and key member — was the Society’s president. He asked members in a survey if they’d like their newsletters on a web site instead of the old way of printed copies sent via the mail.

The query became not a replacement, but an innovative addition. Now the Society’s web site posts documents, videos, and audio recordings contributed by members. Many of these items are historically and currently significant, and do not appear elsewhere on the Web. 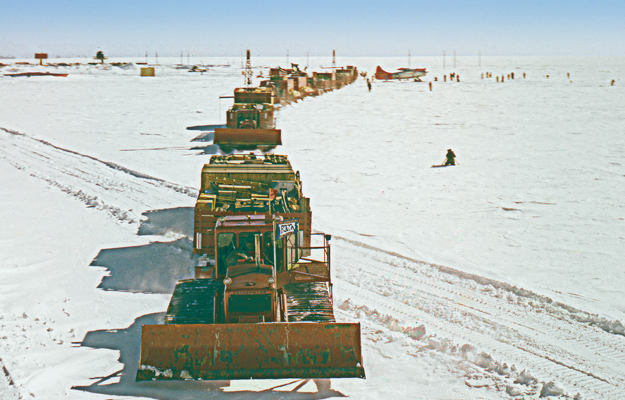 Tractors depart Little America V during the 1956-57 summer to establish Byrd Camp. An interactive “Time Trek” maps historic and current events, stations, geographic features, and images. Society member Tom Henderson coordinates the site. A slide-scan service run by current president Charles Lagerbom has digitized 25,000 images donated by members and others. Special projects include a three-DVD set in which 30 prominent scientists and others from the last 50 years come before the camera and describe their involvement in the Antarctic.

While newsletters — vibrant as ever — still go out in the post; they’re online as well, along with other Society documents that date back to 1959.

In a way, it’s the same Antarctican Society after half a century — just retooled, like a friend back from a trip with wisdom and insights you never knew she had. Membership has included such illustrious Antarcticans as Laurence Gould and Paul Siple, both of whom worked in the Byrd Antarctic expeditions. The current 325 members include veterans of the Ronne Antarctic Research Expedition, IGY, Operation Deep Freeze, and of course the present-day U.S. Antarctic Program.

Stations represented range from Little America, East Base, Byrd, Hallett, Eights, and Plateau to McMurdo Station , South Pole, and Palmer Station , as well as non-American stations. Other members have worked in the Antarctic on research ships or traveled there on tour expeditions, or simply enjoy the opportunity to associate with those who have been there. The Society is multigenerational, with many of its members active in Antarctica right now.

It’s a mix of yesteryear and the present that suits me and I guess others. Anyway, I wouldn’t dare complain about the content; Paul Dalrymple would only say, “Write your own newsletter.” For more information, see the Society’s membership page .