High Park Fire in Colorado As Seen From Space 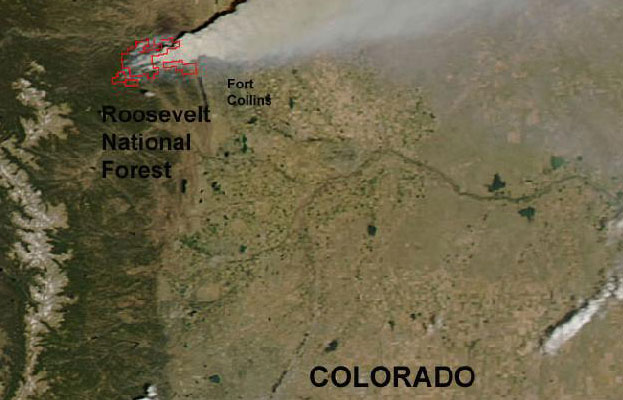 NASA’s Aqua satellite passed over the High Park Fire in Colorado on June 10, 2012 at 2030 UTC (4:30 p.m. EDT) and captured this visible image of the thick pall of smoke blowing east, just north of Fort Collins.

The fire is located about 15 miles west of Fort Collins, in the Arapaho and Roosevelt National Forests and the Pawnee National Grassland. The light brown colored smoke and the heat signatures from the fires were detected by the Moderate Resolution Imaging Spectroradiometer (MODIS) instrument that flies onboard Aqua. The image was created by the MODIS Rapid Response Team located at NASA’s Goddard Space Flight Center in Greenbelt, Md.

The High Park Fire has already consumed 20,000 acres and continues to grow. The U.S. Forest Service reports that 250 people are currently fighting the fire. Evacuations have already taken place and more are under way. The U.S. Forest Service reports 18 structures were lost in the fire. For more information about evacuations, visit the Incident Response System website (http://www.inciweb.org/incident/2904/). For road closures in Larimer County, visit: http://www.co.larimer.co.us/emergency/emergency_detail.cfm?nam_id=85.