This June 29, 2013 image from the OMI, or Ozone Monitoring Instrument aboard NASA’s Aura satellite shows nitrogen dioxide (NO2) levels in Arizona pertaining to three large fires. The highest levels of NO2, which is produced by combustion, were from the Yarnell Hill fire (dark red and brown). NO2 concentration is given as the number of molecules in a cubic centimeter. The highest NO2 concentration values (8-9 x 10^15) indicated that this strong fire was burning a large amount of combustible material and thus generating a large amount of NO2 in a small area. 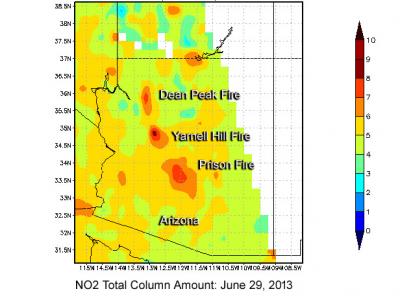