By SpaceRef Editor
December 28, 2012
Filed under Astrophysics, The Antarctic Sun, US 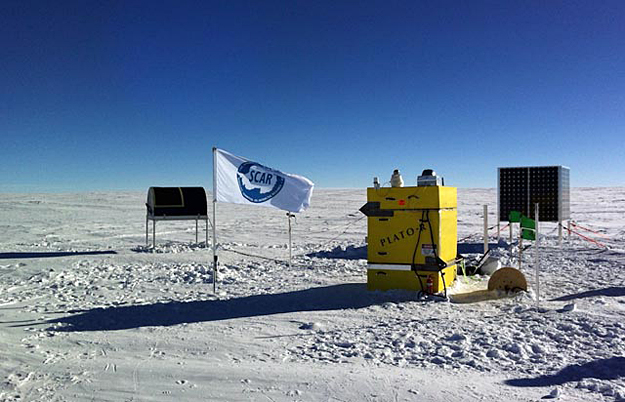 The completed astronomical observatory at Ridge A. From left, the HEAT telescope, the yellow PLATO-R instrument module, with cameras and antennas on the rooftop, and solar panels to power the observatory in the summer. Not seen: The green PLATO-R engine module (above) provides power during winter. Photo Credit: Craig Kulesa

Peter Rejcek, Antarctic Sun Editor: Some consider a trip to the South Pole as going to the literal end of the world. In that case, Craig Kulesa has found a site in Antarctica somewhere between the Earth and starry skies above.

“It’s as close as you can get to space with your feet still on the ground,” said Kulesa, associate astronomer at the University of Arizona .

“It” is a place that scientists have dubbed “Ridge A.” It’s not far from the highest point on the polar plateau, a region called Dome A, which reaches a lung-laboring 4,100 meters in altitude. Ridge A is where Kulesa and his U.S. and Australian colleagues have located an autonomous, robotic observatory to study the interstellar clouds where stars are made .

There are few places on the planet where it’s possible to observe such high frequencies with submillimeter wavelengths, largely due to the water vapor in the atmosphere. It’s a bit like trying to look through clouds or a fogged-up window. Yet on the high and dry polar plateau, it’s possible to get a clear view into space more often than not.

And it appears there’s no better place than Ridge A, located about 900 kilometers from the U.S. Antarctic Program’s South Pole Station .

“It turns out that practically every day from this Ridge A site we can look up and we can see a fairly transparent atmosphere at these crazy high frequencies,” said Kulesa, principal investigator on the HEAT project.

The geographic South Pole itself has been a proving ground for radio astronomy, and the station is home to major projects such as the South Pole Telescope . The SPT, as it’s called, is an experiment helping researchers understand everything from the mysterious dark energy that appears to be causing the universe to expand ever faster to the inflationary burst that occurred right after the Big Bang .

But stable and dry atmosphere above the South Pole, located at about 2,830 meters above sea level, has its limitations, particularly for the high-frequency signals emitted by the atoms and molecules of the dust clouds where stars are born.

“It’s in that Never Never Land between visible light and what we normally consider radio waves,” Kulesa said of terahertz astronomy.

The only option was, quite literally, to go uphill.

That opportunity came in 2008, when a team of Chinese scientists traversed across East Antarctica to Dome A. They set up the Australian University of New South Wales’ PLATeau Observatory (PLATO) , an autonomous station that contained a number of different experiments. Among the various instruments was a National Science Foundation-funded tiny telescope dubbed pre-HEAT , whose primary mission was to observe whether the polar atmosphere would be suitable for high-frequency astronomy.

Kulesa said results showed that Dome A region was the “best place on Earth for terahertz astronomy.”

Further data from satellites suggested that the optimal site on Antarctica’s highest spot was the so-called Ridge A, about 100 miles from the Chinese research station Kunlun, where PLATO set up during the International Polar Year (IPY) campaign about five years ago.

The follow-up PLATO-Ridge A (PLATO-R) observatory involved a collaboration between the University of Arizona and UNSW. The U.S. scientists built the telescope while their colleagues from Down Under designed and constructed a lightweight robotic platform to provide power and communications.

The whole observatory, powered by solar panels in summer and small diesel generators in winter, had to fit in a Twin Otter aircraft. The size of the telescope itself was dictated not only by the science requirements, but also by the width of the plane’s cargo door. In January 2012, all the equipment and four team members flew from the South Pole to Ridge A to install the observatory.

“It’s a great story about how to do science internationally on the plateau,” Kulesa said. “We’re trying to push the boundaries for what you can do with robotic, autonomous telescopes and observatories. There’s a limit in complexity as to how far you can go with that currently. Our goal is to push that limit every year — do something out there that no one else has ever done.”

The telescope has collected data ever since, though a fuel shortage toward the end of the dark winter caused it to shut down for a while. “One of the cool things is that when the sun came back up, the entire experiment woke itself back up and started to talk to us back home. We’re alive and running again,” Kulesa said.

In just the short time that HEAT has been observing the Milky Way Galaxy, astronomers have identified several regions where they think the star-producing molecular clouds may be forming.

“These are the first measurements of the formation of these clouds,” Kulesa said. “We’ve measured also now the destruction of cloud material in two or three dozen places — we’re starting to figure how long these clouds live and how they sculpt what galaxies look like.”

“Our knowledge of the evolution of stars and galaxies still really in its infancy,” he added. “One of the keys to understanding [that evolution] is these molecular clouds. Every star in the galaxy, and in every galaxy, was formed in one of these molecular clouds. It’s embarrassing that we have no idea how they come about. This is what we hope HEAT will teach us.”

Kulesa and several colleagues will return to the site during the 2012-13 field season to swap out the telescope with an upgraded instrument that will run continuously for another year. The HEAT telescope only requires about 150 watts of power, including the cryogenics required to super-cool the telescope’s detectors to a scant 50 degrees above absolute zero.

HEAT is sort of a sister experiment to the NASA’s Stratospheric Terahertz Observatory (STO) launched last year on a long-duration balloon from McMurdo Station . Kulesa is a co-principal investigator on that project along with University of Arizona astronomy professor Christopher Walker , among others.

The telescopes operate over a vast range of frequencies, with STO delving into even higher frequencies. But the goals are the same: To understand the birth, death, and rebirth of stars and planets from the dust and gas of those mysterious molecular clouds.

“It’s kind of like [studying] the ecology of the Milky Way,” Kulesa said.

NSF-funded research in this story: Craig Kulesa and Christopher Walker, University of Arizona, Award No. 0944335 .