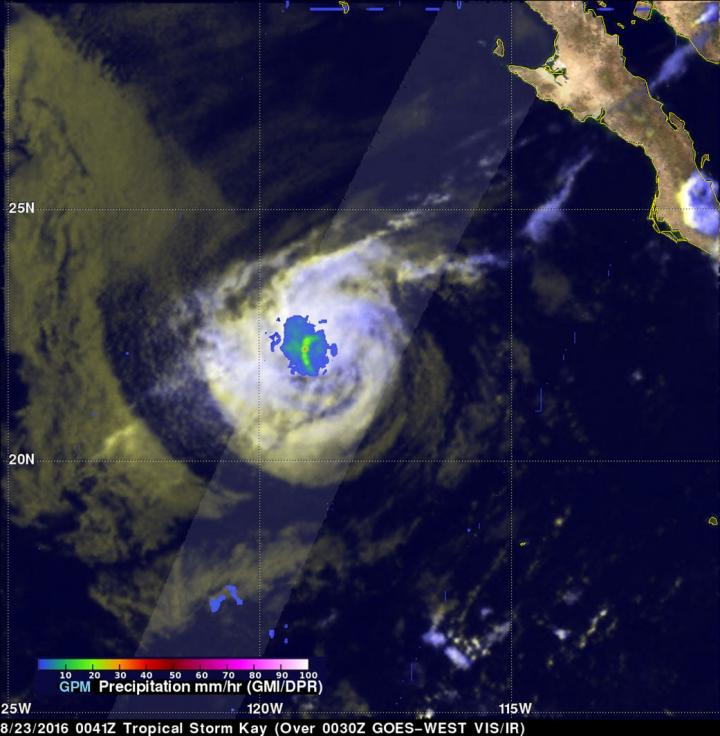 The remaining traces of rainfall in weakening Tropical Depression Kay was in a small area when the Global Precipitation Measurement mission or GPM core satellite passed overhead early on Aug. 23.

The GPM core observatory satellite captured data as it passed above dissipating tropical storm Kay southwest of Baja on Aug. 22 at 8:41 p.m. EDT (Aug. 23 at 0041 UTC). Data captured by GPM’s Dual-Frequency Precipitation Radar (DPR) instrument shows that precipitation was limited to a small area of rain west of the center of the dissipating tropical storm. DPR found that rain was falling at a maximum rate of about 58 mm (2.3 inches) per hour in this small stormy area. GPM is a joint mission between NASA and the Japan Aerospace Exploration Agency

By 5 p.m. EDT, the National Hurricane Center (NHC) reported that Kay had been devoid of deep convection and thunderstorms for about 12 hours. At that time, Kay’s center was about 710 miles (1,145 km) west of the southern tip of Baja California, Mexico.

Kay was then classified as a remnant low pressure system and faded into the hurricane history of the Eastern Pacific Hurricane Season.