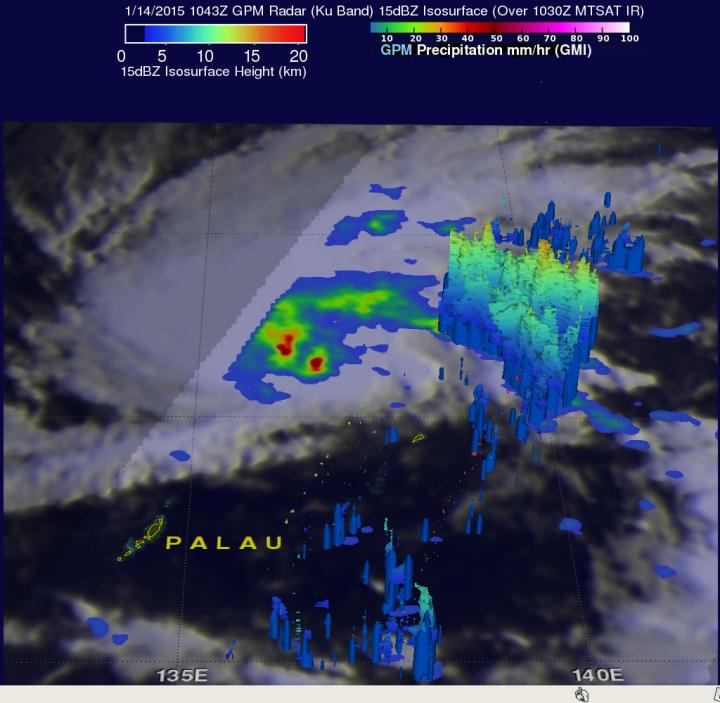 The GPM core satellite flew above Mekkhala on January 14, 2015 at 1043 UTC (5:43 a.m. EST). GPM’s Microwave Imager (GMI) instrument observed rain falling at a rate of over 71.63 mm (about 2.8 inches) per hour in intense convective storms near the tropical cyclone’s center.

On January 15 at 0900 UTC (4 a.m. EST), Mekkhala’s maximum sustained winds were near 35 knots (40 mph/62 kph). The center of the storm was located near 11.6 north latitude and 132.2 east longitude, about 277 nautical miles (318.8 miles/513 kph) north-northwest of Koror, Palau. Mekkhala was moving to the west at 8 knots (9.2 mph/14.8 kph). Satellite data showed that the bulk of convection and thunderstorms were over the western quadrant of the storm on January 15, indicating moderate vertical wind shear.

The Joint Typhoon Warning Center forecast calls for Mekkhala to slowly intensify over the next day and a half reaching a peak intensity of 50 knots (57.5 mph/92.6 kph) prior to making landfall. Mekkhala is expected to approach the central of Visayas region of the Philippines on January 17.

After landfall, interaction with the land, increased friction from moving over land and more stable air are expected to weaken the storm as it moves through the central and northern Philippines in a northwesterly direction, passing Manila in Luzon on January 19 and emerging into the South China Sea.