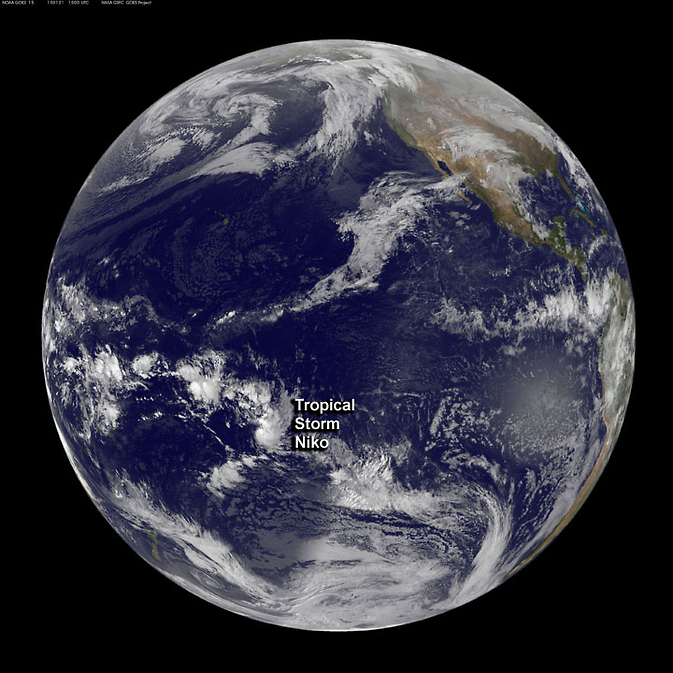 NOAA’s Geostationary Operational Environmental Satellites or GOES-West satellite sits in a geostationary orbit over the Eastern Pacific Ocean. Geostationary describes an orbit in which a satellite is always in the same position with respect to the rotating Earth. This allows GOES to hover continuously over one position on Earth’s surface, appearing stationary. As a result, GOES provide a constant vigil for the atmospheric “triggers” for severe weather conditions such as tornadoes, flash floods, hail storms and hurricanes.

Infrared data taken from GOES-West on Jan. 21 at 1500 UTC (10 a.m. EST) was made into an image at NASA/NOAA’s GOES Project at NASA’s Goddard Space Flight Center in Greenbelt, Maryland. The infrared image showed bands of thunderstorms in the eastern quadrant wrapping into the low-level center.

Over the next two days, Niko is expected to pass east of Tahiti, which is located within the Society Islands, which are part of French Polynesia. French Polynesia is made up of 118 islands and atolls that cover more than 1,200 miles (2,000 kilometers) in the South Pacific Ocean.

The Joint Typhoon Warning Center forecast calls for Niko to strengthen into a hurricane after passing Tahiti on its way south into the open waters of the South Pacific Ocean.