Hurricane Earl lashed the North Carolina coast last night and this morning, September 3, and is now headed for Cape Cod, Massachusetts. This morning’s image from the GOES-13 satellite saw Hurricane Earl’s clouds covering most of the northeastern U.S.

The Geostationary Operational Environmental Satellite known as GOES-13 captured an image of Hurricane Earl at 7:32 a.m. EDT this morning, September 3. The image clearly showed a huge Hurricane Earl northeast of North Carolina with cloud cover stretching over the northeastern U.S. A disorganized Fiona was also seen southeast of Earl near Bermuda. GOES satellites are operated by NOAA, and images and animations are created by the NASA GOES Project at the NASA Goddard Space Flight Center, Greenbelt, Md. 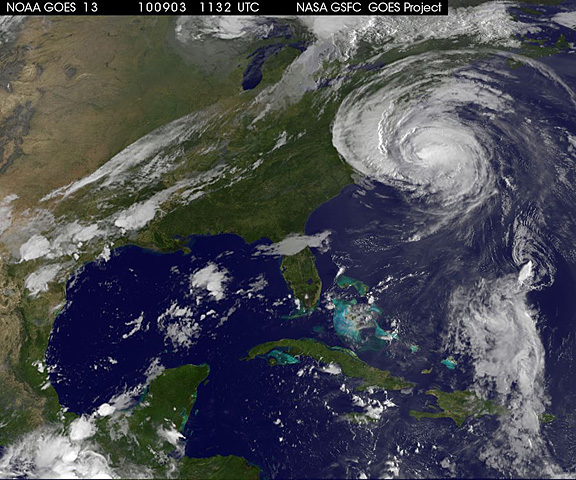 This image from the GOES-13 satellite at 7:32 a.m. EDT on September 3 shows a huge Hurricane Earl northeast of North Carolina with cloud cover stretching over the northeastern U.S. A disorganized Fiona is located in the bottom right side of this image Credit: NOAA/NASA GOES Project

The National Weather Service forecast for Nags Head, North Carolina for Friday calls for “Tropical storm conditions expected, with hurricane conditions possible. Showers, mainly before 11am with a high near 87. Northwest wind 45 to 55 mph decreasing to between 25 and 30 mph. Winds could gust as high as 75 mph.” Nags Head is currently under a hurricane warning.

Earl is about 130 miles east-northeast of Cape Hatteras, North Carolina and 395 miles south-southwest of Nantucket, Mass., near 36.2 North and 73.6 West. It was moving north-northeast near 18 mph and is expected to turn toward the northeast between 8 p.m. EDT tonight and 8 a.m. EDT on Saturday. Earl will approach southeastern New England tonight.