By SpaceRef Editor
October 4, 2007
Filed under Ames Research Center, US

The NASA Ames Research Center Office of Diversity and Equal Opportunity, the Lesbian, Gay, Bi-Sexual, and Transgender (LGBT) Advisory group, and the Asian American-Pacific Islander Advisory group invite you to attend our first observance of National Coming Out Day.

National Coming Out Day is observed on October 11 by members of the lesbian, gay, bisexual and transgender (LGBT) communities and their allies. The day was founded by Dr. Robert Eichberg and Jean O’Leary in 1988, in celebration of the Second National March on Washington for Lesbian and Gay Rights one year earlier, in which 500,000 people marched on Washington, D.C., for gay and lesbian equality. National Coming Out Day events are aimed at raising awareness of the LGBT community among the general populace in an effort to give a familiar face to the LGBT rights movement.

The keynote speaker for the event will be George Takei, the charismatic actor who portrayed “Hikaru Sulu” in the original “Star Trek” television series and a number of the “Star Trek” feature films. George has been an outspoken advocate for the LGBT civil rights movement since he came out as a gay man in 2005. In fact, an asteroid between Mars and Jupiter has recently been renamed 7307 Takei in honor of the actor, in part out of appreciation for his work with the Japanese American Citizens League and with the gay rights group Human Rights Campaign. Takei, a spokesman for HRC’s Coming Out Project, was cultural affairs chairman of the JACL, and he was appointed to the Japan-U.S. Friendship Commission by former President Clinton.

There will also be an introduction to Ames’ National Coming Out Day observance event by Ardel Thomas, Chair of the Queer Studies Department at the City College of San Francisco. Ardel had the privilege of participating in the first march on Washington, D.C., for LGBT civil rights, a milestone in the ongoing LGBT civil rights movement that comprised the origin of National Coming Out Day, which occurred 20 years ago, on October 11, 1987.

Location: Eagle Room, Building 943 (across from the NASA Exploration Center, just outside and to the right of the Ames Research Center main security gate.)

To see a copy of the event flyer, visit: http://eo.arc.nasa.gov/Sulu%20event%20.pdf For more information, contact Travis Liggett at mailto:[email protected] 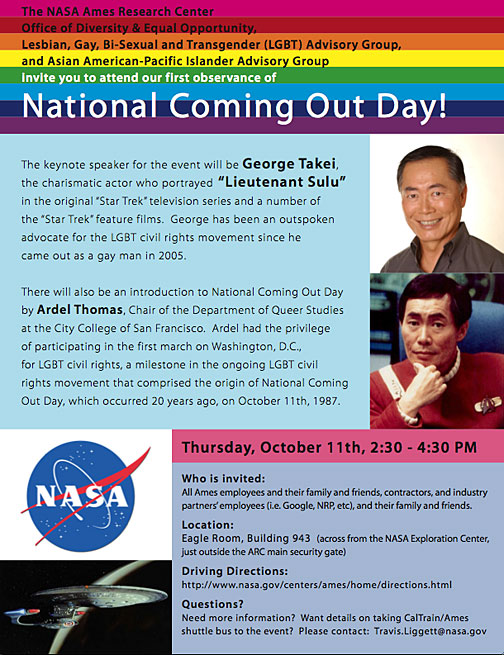