By SpaceRef Editor
September 11, 2008
Filed under Government Accountability Office, US

Congress expanded the National Aeronautics and Space Administration’s (NASA) ability to use term appointments to fill civil service positions in 2004. NASA sought this flexibility to ensure that it could hire and retain the workforce it desired. In a joint explanatory statement accompanying the Consolidated Appropriations Act, 2008 (Pub. L. No. 110-161), you asked us to review NASA’s use of term appointments for civil servant positions. We briefed the committees on the results of our review. This report summarizes that briefing, which is reprinted in full as an enclosure. As agreed to by the committees, this concludes our work performed under this mandate.

Since receiving its expanded human capital flexibilities, NASA has steadily increased its use of term appointments when hiring new employees. Subsequently, NASA has increased the number of conversions from term to career or career-conditional appointments. From 2003 through 2007, the majority of employees who separated from NASA voluntarily retired. Less than 1 percent separated because the employee’s appointment expired. NASA’s goal is to evolve to a science and engineering workforce that at a minimum is comprised of 15 percent term/temporary appointments by 2013. However, NASA centers are given the option to use term appointments for other positions.

Over the past few years, GAO and others in the federal government have underscored the importance of human capital management and strategic workforce planning. Federal agencies, as a whole, face new and increasingly complex challenges in the 21st century and must transform their organizations to meet the challenges of long-term fiscal constraints, changing demographics, evolving governance models, and other factors. This involves developing a strategic approach to human capital management that integrates human capital efforts with their missions and program goals, which we have recently reported federal agencies typically lack. In response to an increased governmentwide focus on strategic human capital management, NASA has taken several steps to improve its human capital management. These include steps such as requesting and receiving additional human capital flexibilities through the NASA Flexibility Act of 2004 (Pub. L. No. 108-201) (Flexibility Act) to help the agency compete successfully with the private sector in attracting and retaining employees and to reshape and redeploy its workforce to support its mission.

Congress passed the Flexibility Act, which included a term appointment authority that was broader than that otherwise generally available to government agencies. In general, federal agencies may make term appointments for 1 to 4 years where the need for employee services is not permanent.1 The Flexibility Act grants NASA an expanded term appointment authority that allows the agency to make term appointments for 1 to 6 years and also allows NASA to non-competitively convert employees from term to career or career-conditional appointments under certain conditions.2 Reasons for making a term appointment include project work such as NASA’s science and exploration projects, scheduled abolishment of a position, reorganization, or uncertainty of future funding. According to NASA, such authority is particularly useful to NASA as it manages the agency’s transition from the Space Shuttle Program to a new generation of transportation vehicles. Other flexibilities granted NASA include recruitment, relocation and retention bonuses, as well as the creation of a Science and Technology Scholarship Program.

Another human capital management tool that is available to all federal agencies is the reduction-in-force (RIF)3 process, which federal agencies use to separate or demote employees for reasons such as lack of work, reorganization, shortage of funds, or the exercise of certain reemployment or restoration rights. NASA has stated that it will only use its RIF authority as a measure of last resort. However, NASA has been prohibited from conducting a RIF since 2005 when Congress included moratorium language in the NASA Authorization Act of 20054 (Pub. L. No. 109-155).

NASA’s Use of Term Appointments

Since passage of the Flexibility Act, NASA’s use of term appointments has steadily increased. We examined NASA’s demographic trends from fiscal years 2003 through 2007 and found that term appointment hiring is increasing and surpassed full-time permanent hiring in fiscal year 2005 (see fig. 1). Currently, term appointments make up 8 percent of NASA’s total workforce, and range from 3 percent to 20 percent depending on the center. Overall, NASA has experienced an increase in hiring levels at the agency. The majority of NASA’s civil service workforce is made up of scientists and engineers. NASA saw a marked decrease in full-time permanent hiring for science and engineering

positions while significantly increasing term appointment hiring for science and engineering positions from fiscal years 2003 through 2007, which mirrors the overall workforce trends shown in figure 1. 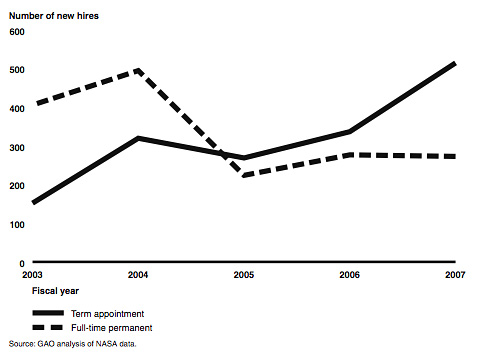 The Flexibility Act grants NASA the ability to non-competitively convert term appointments to career or career-conditional appointments if certain conditions are met, such as

Since the passage of the Flexibility Act, NASA’s conversion rates more than doubled from fiscal years 2005 through 2007 (see fig. 2), with Johnson Space Center accounting for the largest percentage of conversions when compared to other centers at NASA.

Figure 2: Number of Conversions from Term Appointment Each Fiscal Year 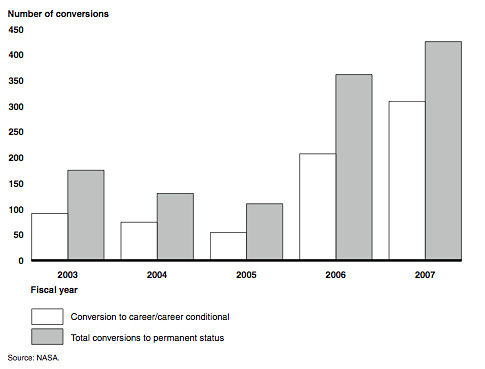 On the other side, most employee separations from NASA consisted of full-time permanent employees from fiscal years 2003 through 2007. Over half of all separations were for voluntary retirement–less than 1 percent of all separations during that time were due to expired appointments that were not renewed. Term appointments accounted for only 4 percent of all employee separations, and appointees left for various reasons such as resignation, transfer to another agency, expired appointment, and termination during the probationary period.

with NASA once they are eligible and when vacancies are advertised, and may be eligible for noncompetitive conversion to permanent appointment if certain criteria are met. NASA considers its term hiring authorities to be among the most important of its human resources strategies and believes that term appointments provide an attractive employment package for applicants, while still not burdening the agency with the obligations of permanent employees. NASA believes the agency needs to have a more flexible workforce to respond effectively to mission, programmatic, and budget changes as well as demographic and labor market fluctuations, and that the agency needs evolve to a more appropriate blend of permanent and nonpermanent civil servants. In light of this, NASA has set a goal for NASA centers to maintain a minimum of 15 percent term/temporary workforce for science and engineering positions by 2013 (not including students or Cooperative Education Program).5 While the 15 percent goal is focused only on science and engineering positions, most centers target all hires for term appointments. NASA has committed to the Office of Management and Budget to increase its use of term appointments in order to increase its future ability to downsize its civil service workforce if necessary due to the changing nature of the agency’s work, program and project funding decreases, and/or termination of program or project work. NASA officials stated the agency’s options are limited for creating a flexible workforce given the prohibition on RIF and that using term appointments generally has not seemed to deter applicants. We are not making any recommendations in this report.

Agency Comments and Our Evaluation

To assess NASA’s use of term appointments, we reviewed and analyzed criteria such as laws, regulations, requirements documents, and stakeholder reports as well as analyzed workforce data and identified trends. We also interviewed appropriate officials from NASA, including those within the Office of Human Capital Management, Office of General Counsel, Space Operations Mission Directorate, Exploration Systems Mission Directorate, and Kennedy Space Center; the International Federation of Professional and Technical Engineers; and the National Academy of Public Administration. We assessed the reliability of the data and determined that they were sufficiently reliable for the purposes of this report. For more information on how we conducted our review, please see the scope and methodology section in the enclosed briefing.

We are sending copies of this report to the NASA Administrator and other interested congressional committees. We will also make copies available to others upon request. In addition, the report will be available at no charge on GAO’s Web site at http://www.gao.gov.

If you or your staff have any questions regarding this report, please contact me at (202) 512-4841 or chaplainc@gao.gov. Contact points for our Offices of Congressional Relations and Public Affairs may be found on the last page of this report. GAO staff who made contributions to this report are listed in enclosure III.

4 The Consolidated Appropriations Act, 2008 (Pub. L. No. 110-161) had the effect of extending a moratorium on RIFs that was included in the NASA Authorization Act of 2005 (Pub. L. No. 109-155). Specifically, the act states that “no funds shall be used to implement any Reduction in Force or other involuntary separations (except for cause) by NASA prior to September 30, 2008.”

5 NASA officials stated that the 15 percent goal was determined by taking into consideration information from worst- case staffing scenarios, a model used to predict the degree of workforce change at each center over the 5-year budget horizon, and prior experience with centers operating with term to permanent employee ratios relatively close to the 15 percent target. GAO did not validate the reliability of NASA’s model.