By SpaceRef Editor
July 5, 2012
Filed under Earth, polar, The Antarctic Sun, US 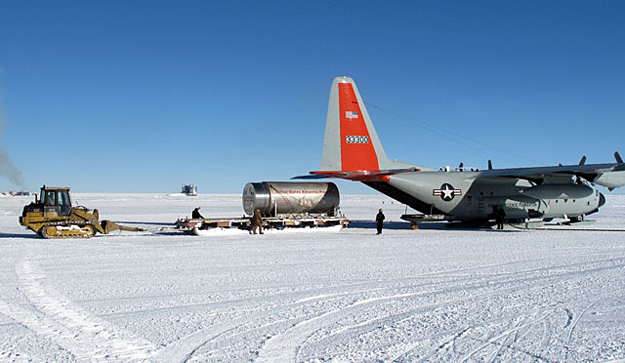 Image: A 4,000-gallon helium dewar is unloaded from an LC-130 at the South Pole Station. Such shipments may soon cease as experiments move away from using liquid helium to cool telescope sensors. Photo Credit: Paul Sullivan

By Peter Rejcek, Antarctic Sun Editor: Helium isn’t just good for party balloons. At one of the coldest places on the planet — where the temperature bolts down to minus 100 degrees Fahrenheit during the winter months — liquid helium has been used to super-cool special telescopes designed to peer into the mysteries of the early universe.

However, the use of bulk liquid helium may also become a thing of the past, as the astrophysical experiments at the South Pole Station complete a conversion to a Cryocooler technology that cools telescope sensors to a temperature just above that of outer space by using and recapturing helium gas.

Helium is a limited resource that promises to become even scarcer and more expensive in the future. A bipartisan bill being considered in the U.S. Senate this year would help conserve the nation’s helium reserves — locked up underground in a natural geological formation near Amarillo, Texas — and give priority to federally funded researchers in times of shortage.

The South Pole Station has done its part over the last decade or so to stretch out the nation’s helium supply, which is used in everything from the manufacture of fiber optics and microchips to cooling the superconducting magnets used in MRI machines.

The zero boil-off system now at the South Pole ensures that almost no helium is lost to the atmosphere.

The telescopes at the South Pole do not operate in the visible light spectrum, but instead measure microwave radiation. The telescope sensors use superconductive materials that must be cooled down to 250 milliKelvin, just a quarter of a degree above absolute zero, to study the cosmic microwave background, often described as an afterglow of the Big Bang when the universe burst into existence.

Liquid helium has been an integral part of cryogenic techniques since astrophysical experiments began at the South Pole in the 1980s, according to Paul Sullivan, South Pole Station manager of science support.

In the nascent days of such research, a scientist would set up a temporary observatory away from the main station, drag a 250-liter container of helium called a dewar to the site, and get about a week’s worth of data.

“That was the early days of what they called Pomerantz Land,” said Sullivan, referring to the late Martin Pomerantz, a professor of physics at the University of Delaware’s Bartol Institute who is considered the father of South Pole astronomy. He first started working on cosmic ray experiments at the bottom of the world in 1964.

By the 1990s, the first bulk shipments of liquid helium started arriving at the South Pole. Sullivan said that during his first season at the station in 1996-97, there were three 4,000-liter containers sitting outside under a metal arch. The helium was tapped until it was all gone, usually running out before the end of the winter observing season, though during his season as the cryogenics technician he was able to get the helium to last until the next resupply.

That resupply in recent days involved transporting the liquid helium by ship to Port Lyttelton near Christchurch, New Zealand, in huge 11,000-gallon refrigerated transports. From there, it was transferred into two gigantic 3,500-gallon dewars, which then were loaded into a U.S. Air Force C-17 for transport to McMurdo Station. The double-walled containers are then flown aboard New York Air National Guard LC-130s to the South Pole.

The logistics costs certainly inflate the basic cost of helium, with raw prices on the rise as supplies get squeezed on the world market. The underground Amarillo reservoir reportedly accounts for about 30 percent of the world market.

“It’s definitely not cheap, and it was a lot cheaper back then [in the 1990s],” Sullivan said.

The first step in limiting the loss of liquid helium was to retrofit the old cryogenics barn, basically a plywood shell of a building, during 2000-2001 to get the three 4,000-liter Wessington dewars inside a climate-controlled environment.

“They just sat at ambient [before]. If a seal failed, game over. This was a controlled environment,” Sullivan said.

Eventually, a new cryo facility was completed during the 2005-06 summer season. About the same time, South Pole Station personnel started working with the dewar manufacturer and Cryomech, a cryo-refrigeration company, on designing and building a system to re-liquefy the helium from its gas phase.

The zero boil-off system has worked so well that the science support staff at South Pole Station is in conversation with the only other group in the U.S. Antarctic Program (USAP) that uses bulk helium to adapt a similar process. NASA’s Long Duration Balloon (LDB) facility near McMurdo Station flies in 2,000-liter liquid helium dewars as needed for launching instrument packages — basically, balloon-borne telescopes — into the stratosphere above Antarctica.

The LDB facility, however, doesn’t have the recapture system that South Pole has developed.

“Once you get the helium down there, don’t let it boil away,” Sullivan said. “The logistical cost, labor and everything is very high.”

Cost was certainly a factor in convincing the National Science Foundation (NSF), which manages the USAP, to buy into the re-liquefecation system. For many years, Sullivan noted, the relatively low price of the bulk liquid helium and the high price of fuel required to power a closed-loop refrigeration system at the South Pole didn’t make economic sense.

Now: “It’s worth the trade-off in power to save the helium and support the science,” Sullivan said.

In addition, the heat generated by the refrigeration compressor is fed into a glycol loop. “It’s basically heating the [Cryo facility] off of the waste heat of the system,” Sullivan explained.

“While our re-liquefecation system worked really well in the last few years, the overall trend in astronomy instrumentation was to move from liquid helium to the dedicated cryo-refrigerating systems serving a particular telescope,” said Vladimir Papitashvili, program director for Astrophysics and Geospace Sciences in NSF’s Office of Polar Programs.

“These systems are similar to what we used for the re-liquefecation system, but the overall cost of cooling telescopes in a new way became really attractive,” he added. “That is why the ‘liquid helium’ era for telescopes is coming to an end at South Pole.”

The Background Imaging of Cosmic Extragalactic Polarization 2 (BICEP2) telescope, an experiment looking for signs of the rapid inflation of the universe hypothesized to have happened fractions of a second after the Big Bang, is the last instrument at the South Pole to require bulk helium deliveries. This winter is its last operational season.

At its peak, the station was using 27,000 liters of liquid helium in one year. This year, the stations expects to supply about 8,000 liters.

Whether that’s the end of bulk liquid helium deliveries to the South Pole is another matter. The station compresses some of the boil-off into gas cylinders. The meteorology department launches weather balloons using the gaseous helium. NOAA also benefits by launching ozone instruments from its nearby Atmospheric Research Observatory using the compressed helium gas.

The NSF is now considering switching to purchasing gaseous helium in the coming seasons for weather balloon launches, which use about 2,000 liters of compressed gas.