This view shows the ground covered in the first image of Mars taken by the High Resolution Imaging Science Experiment camera (HiRISE) on NASA’s Mars Reconnaissance Orbiter. The spacecraft, launched Aug. 12, 2005, began orbiting Mars on March 10, 2006. HiRISE took this first test image from orbit on March 24, 2006, from an altitude of 2,489 kilometers (1,547 miles). Images taken during the mission’s main science phase, beginning in fall 2006, will be from an altitude about one-tenth as far from the ground, gaining even higher resolution. 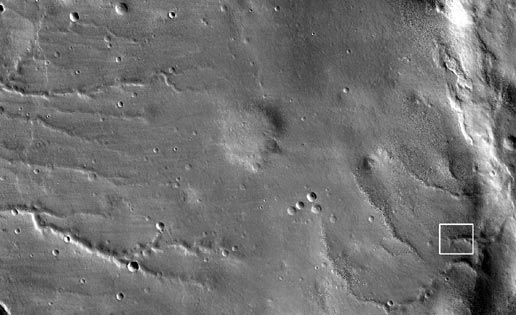 The full product would be 20,000 pixels wide by 9,500 pixels high. The white box at lower right indicates the position of a sample image (see image) offered in full resolution.

The quality of this test image is spectacular, with no hint to the eye of any smear or blurring. A high signal-to-noise ratio reveals fine details even in the shadows.

The scene covers an area 49.8 kilometers (30.9 miles) wide and 23.6 kilometers (11.7 miles) high, of landscape typical of Mars’ mid-latitude southern highlands. The location is 34 degrees south latitude, 305 degrees east longitude. An old, muted crater lies at the middle of the scene, with sets of channels to the left and right. Superimposed on parts of this terrain is a much younger, layered mantle of debris. The debris mantle is smooth in places but rough in other areas where it may have partially sublimated. This suggests that the debris mantle is (or was) rich in volatiles such as ices of water, carbon dioxide or both. Also superimposed on the landscape are many small sharp-rimmed impact craters and wind-blown dunes. This image illustrates processes that may have involved water both on ancient Mars (channels and eroded craters) and much more recently in Mars’ history (volatile-rich debris mantle).

The radiometric and geometric processing of this image is very preliminary. In particular there are mismatches visible at full resolution along the seams between the 10 side-by-side images from separate CCDs (charge-coupled devices, which are electronic optical sensors).