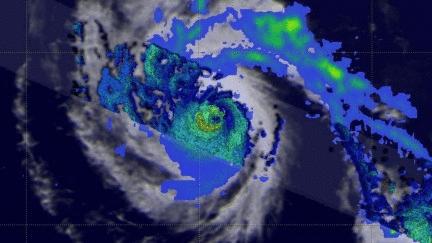 As of 5 a.m. July 20 (0900 UTC), Fernanda had weakened to tropical storm status. There are no coastal watches or warnings in effect.

The National Oceanic and Atmospheric Administration’s National Hurricane Center reported that the center of Tropical Storm Fernanda was located near 18.2 degrees north latitude, 137.7 degrees west longitude. Fernanda is moving toward the west-northwest near 9 mph (15 kph), and this general motion is expected to continue for the next couple of days.

The Global Precipitation Measurement mission’s Core Observatory satellite, or GPM, had an excellent view of hurricane Fernanda at 5:10 p.m. July 17, 2017 (0110 UTC on July 18). At that time, Fernanda had weakened from its peak wind speed of 143.75 mph (125 knots) attained on July 15, 2017, but the storm (then at category two on the Saffir-Simpson hurricane wind scale) still had maximum sustained wind speeds of about 109 mph (95 knots).

Maximum sustained winds have since decreased to near 70 mph (110 kph) with higher gusts, the NHC reports. Additional weakening is forecast during the next 48 hours, and Fernanda could become a tropical depression by late Friday.

GPM is a joint mission between NASA and the Japan Aerospace Exploration Agency.